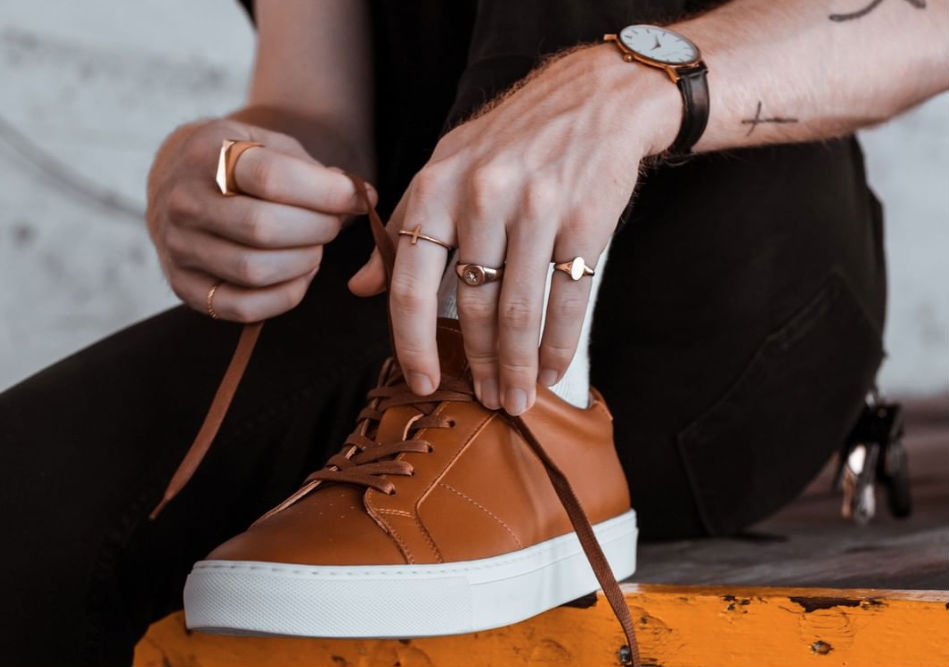 Playing an oversized role in American pop culture, sneakers are more than just athletic footwear. As a fashion statement, they often transcend style, conveying something about their wearers’ status, musical tastes or politics. At its stylishly appointed sneaker boutique in a Venice bungalow, Brooklyn-born Greats is making a big impression with an emphasis on quality craftsmanship and value.

Ryan Babenzien and Jon Buscemi founded Greats in 2013; Buscemi departed a year later to create his own eponymous brand, one with much higher price points. “It started from a style position, specifically style and price,” Babenzien says of the inspiration for the brand. “How can we make a premium, luxury sneaker at the most disruptive price? That was the genesis.”

Babenzien, previously a marketing executive for Puma and K-Swiss, knew the industry and modeled his new brand after eyeglass trendsetter Warby Parker, a vertically integrated operation that sells directly to consumers.

By eliminating the cost of wholesalers, both companies are able to sell luxury-quality products at accessible prices.

“It was our position that all great brands of the future from 2014 and beyond were going to be direct-to-consumer-based,” says Babenzien.

Greats’ products speak to a multigenerational audience: The shoes appeal to baby boomers who love old-school sneaks while attracting younger consumers with contemporary colors and materials.

Babenzien insists that classic sneaker silhouettes are still relevant and that most bestsellers from big legacy brands such as Nike tend to be based on a handful of decades-old concepts. With the company’s respect for timeless styles including slip-ons, hightops and chukkas, traditional sneaker aficionados relate to Greats, but so do younger people looking for fresh looks and a commitment to craftsmanship.

Everybody of a certain age remembers his or her first pair of all-white sneaks, and Greats offers some stylish whites that stand the test of time.

For those interested in color the Rosen ($59-$99) is offered in a rich oxblood; there’s also a stylish gray body with soles layered in turquoise and orange, as well as a dramatic black over a green sole structure layered with a streak of yellow and a red outer sole that rides up the front tip.

Such prices are hard to believe for a hot brand with a celebrity following, one that includes former President Barack Obama.

“We’re not a hype brand,” Babenzien says. “I want to make a really great product that’s super-amazing quality and super-stylish and get it to the most people because I’m super proud of what we do.”

The best price possible gets it to the most people, he points out.

“After launching the brand on our own principles, we actually found this quote by Charles Eames, who’s one of the most prolific designers in history: ‘The best, for the most, for the least.’”

When Greats noticed a disproportionate demand for smaller sizes, management realized it had inadvertently discovered a strong following among women and introduced a line of women’s footwear last year. A bestselling shoe for the ladies is the Royale ($179), handmade in Italy and available in a variety of colors including a smart blush-lavender combination; a limited-edition collection of Royale sneaks features colors such as gold lamé ($199).

Reinventing a classic shoe popularized by Vans is a Nick Wooster-inspired slip-on ($169-$269), available in white, ash gray and a neutral suede. This shoe is also available for women with a black-leather cap toe ($179); the Slide ($89) slip-on sandal is offered with a variety of Italian-leather uppers.

Recognizing the role of sneakers in pop culture and entertainment, Greats has entered into collaborations with designer Jason Wu and NFL player Marshawn Lynch; the latter’s shoe sold out in 49 minutes.

“Up until recently, luxury was defined by the most expensive product with a logo,” says Babenzien. “The internet has changed that because you no longer need to spend the most money to get luxury-quality goods.”