You are at:Home»Our LA Traffic Guide in a Nutshell

Whether or not you’ve just blown the head off of your former associate as he continued to insist, “Man, I don’t even have an opinion,” there are no safe places when it comes to surviving Los Angeles traffic, even if you’ve just felt the touch of God, a bonafide miracle, if you truly believe that “God got involved.” The city traffic sprawl is pure hell. There is no getting around it. But having a good LA traffic guide might just guide you to purgatory, eventually. There are tricks, and yes they can save you from wasting away years in the bumper to bumper go nowhere Hades that is Los Angeles. Trust us. This is probably the most valuable tourist info you’ll look up online today.

What Twisted Sadist Invented the 405? Here’s a Better Option 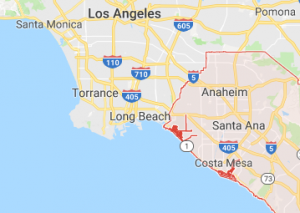 For starters, avoid gridlock like a Justin Bieber concert. You just don’t want to go there. Anywhere from 3:30 to 7:30 p.m. and 7:30 to 9:30 a.m. is a highway parking lot to the 9th circle of hell. Hit the gym; hit the bar. HIt anything but the highway. Trust us. You’ll thank us later. If you have to commute, oh well, that’s the price of Hollywood stardom, but if you’re a tourist or have anything better to do than wait in traffic, you’ve been warned.

Another top rule in our LA traffic guide is to stay off the 405. Sepulveda Boulevard runs parallel, but moves faster, as in the difference between normal traffic and watching paint dry. It’s windier, but trust us, you’ll get there faster, and you’ll still be going the right direction.

The LA Metro: Do’s and Don’ts for your LA Traffic Guide

If you’re a first time LA visitor, whether its for business or pleasure, don’t underestimate the power of public transit. It’s definitely accessible throughout the city but we prefer to take the train vs the bus. Remember how we mentioned that traffic stinks in LA? Well the underground train can be a breeze compared to sitting in a bus and stuck in the same car traffic during a notorious LA traffic jam at rush hour. You need an LA traffic guide.

Do: Take the train if you’re staying in the following neighborhoods; K-town, DTLA, Hollywood, North Hollywood, Little Tokyo, Highland Park, East LA, Pasadena, Chinatown, Culver City, Exposition Park and Santa Monica to name a few.
Don’t: Take the bus during prime LA rush hour but the only exceptions are the Rapid Bus, the Silver Bus and the Orange Line in the San Fernando Valley.
Do: Get a TAP card for $1 and preload the amount by paying with cash or credit.
Don’t: Forget your TAP card, there are numerous checkpoints which may result in a $250 fine if you don’t have proof of ride purchase.
Do: Map out your walking distance to the LA Metro station, check the timetables on metro.net and follow @metroLosAngeles on twitter for live updates.
Don’t: Give up on a minor delay and pay a ridiculous price on a rideshare taxi to avoid LA traffic. You’re here for a visit, relax and bring a book in case there are delays. Although there are plenty of fun things to do in Los Angeles, remember that it’s a large city and very spread out, so it takes time to get places.