You are at:Home»New LA Attractions that are a Must See for Tourists

What are the hottest new fresh destinations in terms of LA Attractions? How about a visit to the Space Shuttle? The California Science Center is now the new official home of the Space Shuttle Endeavor, which flew the coast of the United States last year before its final touchdown at the Los Angeles International Airport. It is now displayed at the Samuel Oschin Space Shuttle Endeavour Display Pavilion. It is truly a top tourist attraction in Los Angeles the whole family will love.

Other recently opened Los Angeles tourist attractions include the Grand Park, a 12-acre urban oasis where a number of concerts, festivals and public events are held. It’s operated by the Music Center, which features public concerts throughout the year by some of the hottest bands on the scene. It can also be rented out for private events.

A Museum on the Ocean

You can also take a tour of the Battleship USS Iowa, known as “the world’s greatest naval ship” when it launched in 1940 but is now an interactive naval museum and public memorial since its opening in 2012. It has had more presidents on its deck than any naval ship in the history of the United States, having hosted Presidents Franklin D. Roosevelt, Ronald Reagan and George H.W. Bush during her 50 years of service. You’ll be walking on the decks of  history.

Transformers: New LA Attractions that Are More than Meets the Eye

Even if you’ve already been to Universal Studios Hollywood, you probably haven’t yet tried the Transformers: 3D Ride. Fun for the whole family, this new LA attraction combines HD 3D media and flight simulation technology for a hold on to your teeth mind blowing experience that will lift you right off the earth. Based on the ever popular movies, the ride will put you in the middle of a sci fi war zone with an experience your family will never forget. Besides the new ride, Universal Studios happens to be the world’s largest working studio and theme park that promises something for the entire family.

Our Most Recommended LA Attractions 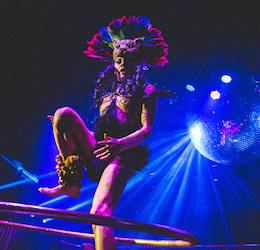 How would we recommend spending your vacation in Los Angeles? Catch a sunset on Venice Beach, the sand that launched Jim Morrison and the Doors. These days, it’s a mix of skateboarders, street artists, musicians and some quirky bars and restaurants. Bring a sweater for the evening. It does get chilly. A great way to spend the afternoon is to check out some masterpiece art at the Getty. Stand face to face with works by,Rubens, and the best of the best of the Impressionists, including Monet, Renoir, Cézanne and Van Gogh. Or go window shopping on Rodeo Drive. You might not be able to afford anything, but you might run into Julia Roberts.

Slide Over the City at Skyspace in DTLA

Los Angeles has a lot to offer all year round since, well you probably already know, the weather is almost always amazing! One the newest LA attractions that has us excited here at SoCal Pulse is OUE Skyspace LA which is located in the heart of Downtown LA inside the US Bank Tower. Until recently, the US Bank Tower was the tallest building west of the Mississippi, being topped of by the new Wilshire Grand Hotel (although some are skeptical about that spike). Back to the iconic downtown LA building, which was completed in 1989, they got an amazing addition which lets visitors view the city of Angels from 1,000 feet above. Offering 360-degree views of LA, it’s an LA attraction you don’t wanna miss! On a perfect sunny day out in LA, you can enjoy two open-air observation terraces giving you an impeccable photo-op of scenic landscapes around LA. Wait, it gets even better… Sky space offers a heart-pounding “sky-slide” where you can slide down from the 33rd floor to the 32nd floor while giving the feeling as if you’re floating on air. The slide is completely made out of thick glass (and held together with metal) where you can view DTLA below you as you slide. They also offer special events such as “Sunrise Yoga” and “Den Guided Meditation” on a scheduled basis but also have holiday inspired events such as Mother’s Day Brunch, May The Fourth (for a Star Wars inspired experience) and many more. Make sure to reserve tickets online for your visit… and if you dare, grab a skyslide combo for $33!

If you ask any of the natives, they would agree that downtown was not always the hot spot for an LA night out nor too popular for a day trip. Recently, the city of Los Angeles has been growing in both population and construction. Sometimes it can be overwhelming to visit a busy city and wait in lines – especially when you’re out on vacation in LA. But fear not, as we guide you through some cool, inspiring and free architectural designs in LA. Take a walking tour starting at The Walt Disney Concert Hall / LA Phil where you can witness a Frank Owen Gehry creation, and if you look closely you may see an original metallic part of the building still shining bright as they had to sand the rest of it down because it was too blinding for drivers. Just a few yards away you can visit The Broad museum which was designed by Diller Scofidio + Renfro into a honeycomb like feature throughout. We must say that one of the best and older architectural attractions in LA is the Los Angeles City Hall building. Walk down from The Broad to city hall in just a few minutes and look south where you’ll see the LA Times building, another icon in the DTLA skyline.