68°F
You are at:Home»Blog»Performing Arts Superstitions Guard Against Bad Luck 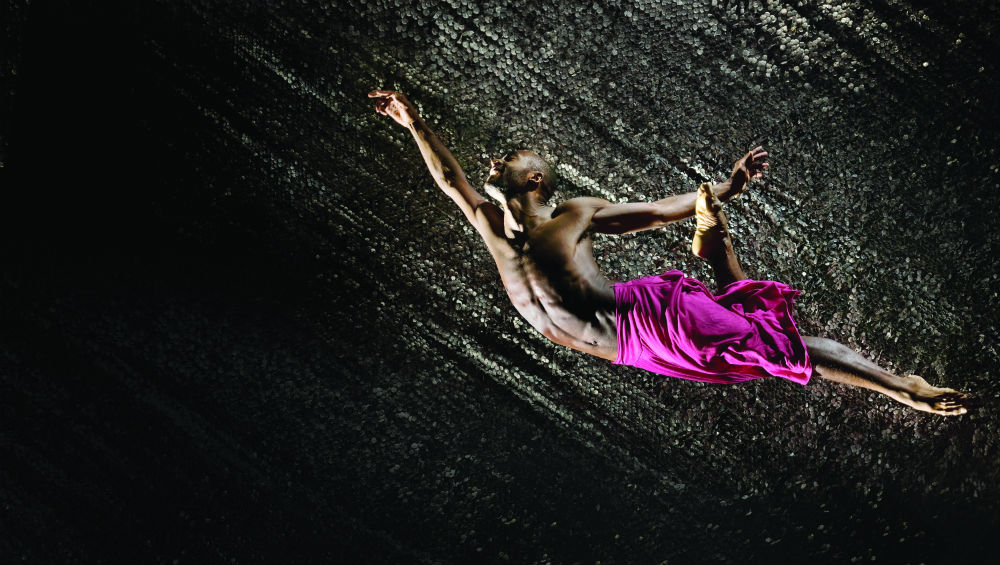 The expression “break a leg!” has nothing to do with moves such as this one by Babatunji in Alonzo Lines Ballet’s “Sutra.”

Not long after operatic soprano So Young Park came to the United States from her native South Korea, she auditioned for roles wearing a deep-purple dress. She felt good in it, and she loved the feel of the light, silky skirt on her legs.

One day in New York, a more experienced singer from her country drew her aside after an audition. “You shouldn’t wear that,” she admonished. “People hate that dress in America.”

That was how Park—now an alumna of L.A. Opera’s Domingo-Colburn-Stein Young Artist Program who appears in Philip Glass’ Satyagraha, Oct. 20-Nov. 11 at the Dorothy Chandler Pavilion downtown—learned about a superstition she’d never heard of back home. Wearing purple in opera, especially Italian opera, is considered bad luck; purple is associated with funerals in Italy.

Did she book more roles after she stopped wearing the dress? “Yes,” Park says with a laugh. “I think I did!”

Many of those who work in the performing arts, particularly the performers themselves, have a litany of superstitions, some well-known—“break a leg,” for one—and others more obscure.

Psychologists view superstition as a way to exert some control over a particular situation and build self-confidence to do one’s best for a positive outcome, so it’s no wonder that the prospect of performing live can elicit such behavior.

Some beliefs are what Christiane Noll, who costars as grieving mother Cynthia Murphy in the Dear Evan Hansen first national tour (Oct. 17-Nov. 25 at the Ahmanson downtown), calls “practical superstitions.”

Among them: Whistling backstage is bad luck.

Theater stagehands used to be off-duty sailors hired for their knowledge of rigging. “They used the bosun’s whistle to call cues,” says Noll, a 2010 Tony nominee for a Ragtime revival. “If you whistled, you might have a sandbag [drop down]on your head.”

There’s a similar safety-related reason for the “ghost light”—the solitary lamp traditionally left onstage after a performance: It provides illumination for anyone still in the otherwise darkened theater. But more fanciful explanations include keeping the light on to ward off theater ghosts and, paradoxically, to encourage spirits to come onstage and perform.

Whatever the ghost light’s origins, Noll says, “I always feel a sense of tradition and nostalgia [about it]. The theater is closed up for the night. Everyone has gone home, but the light remains burning much like the magic and imagination of the theater, ready to light up the audience again and again. It’s magical.”

Betty Buckley, who stars in the tour of Hello, Dolly! (Jan. 22-27 at the Segerstrom Center for the Arts in Costa Mesa and Jan. 29-Feb. 17 at the Pantages in Hollywood) has even recorded a CD called Ghostlight.

Other theater superstitions have less definitive origins. There are a number of theories behind “break a leg,” probably the most traditional means of wishing someone good luck before a performance; saying “good luck” is actually considered bad luck.

“Legs” are a type of curtain used in a proscenium theater to hide the wings—the areas just offstage on either side.

In the vaudeville era, overbooked performers were paid only if they were chosen to go onstage—“breaking” the leg to go before the audience.

Another theory: The more enthusiastic an audience, the deeper performers should bow, breaking the leg line.

In ballet, where no one wants to envision a broken leg, a traditional comment is “merde,” French for excrement, most likely harkening to the days of horse-drawn carriages, when an abundance of horses signified an abundance of people attending.

Both dance and opera performers use the saying, “toi, toi, toi,” from the German “teufel” (devil), to ward off evil and any spells or curses.

Also, says Park, “in opera, we say, ‘In bocca al lupo’” (Italian for “Into the mouth of the wolf”); this bad-means-good expression originated among hunters.

Some specific works are considered cursed, probably because there is a history of misfortune—injury and even death—associated with them. In theater, the name “Macbeth” is never to be spoken, except in Shakespeare’s own dialogue, lest disaster strike; the show is referred to as “the Scottish play.”

Park says she’s not really superstitious, regarding the good-luck practices more as traditions and rituals to be honored.

To choreographer Alonzo King, whose Alonzo King Lines Ballet company performs Nov. 1-3 at the Wallis Annenberg Center for the Performing Arts in Beverly Hills, superstition is “irrational fear.” Dancers train for accuracy, he says, and like scientists, “most dancers are truth-seekers.” His company members do indulge in the pre-performance expressions, but “what they’re really saying is: ‘Give your all.’”

Noll prefers to say, “Sing well,” rather than “Break a leg,” feeling the latter is a bit crass.

Still, she adds about Dear Evan Hansen, in rehearsal at press time, “I’m sure that, because this is a very emotional show, a lot of people are going to guard their sanity. They’ll try to keep as positive an atmosphere as possible backstage.”