76°F
You are at:Home»Blog»The Lonely Lion: Get to Know P-22, LA’s Most Famous Mountain Lion

P-22’s digs are too small, his commute’s a killer and, despite his good looks and millions of adoring fans, his relationship status remains stubbornly single. It’s not easy being LA’s most famous mountain lion.

By Andrea Richards, adapted from WHERE Guestbook Los Angles

You won’t find one of the city’s biggest celebrities dining at Little Dom’s or meeting for drinks at the Chateau Marmont, but you will find him dining nearby—on mule deer high up in the hills of Griffith Park. While his species goes by many names—catamount, cougar, panther, puma and mountain lion—there’s only one of his kind that has international name recognition and has graced the cover of both the Los Angeles Times and National Geographic magazine. P-22, the golden, glamorous puma, is the pride not only of Los Angeles wildlife advocates, but also of ordinary citizens who can’t tell a bobcat from a house cat.

Named by the National Park Service, who monitors the mountain lion via a GPS radio collar (“P” for puma, “22” for being the 22nd cougar tagged in the Los Angeles area), P-22 has multiple social media feeds, an annual festival held in his honor and a recently mounted exhibition at the Natural History Museum of Los Angeles County. In 2015, when workers came face to face with P-22 in the crawl space under a mansion (imagine their surprise!), news helicopters descended on the cougar as if he were a car chase or a Kardashian. It wasn’t until the paparazzi left that the 130-pound cougar slunk back to his home in L.A.’s 4,310-acre Griffith Park, located at the eastern end of the Santa Monica Mountains.

Why is this particular mountain lion so special? After all, the L.A. area is home to at least 60 mountain lions, and that’s only the number the park service has tagged—there are certainly more. (Los Angeles is the only megacity, aside from Mumbai, India, that has big predatory cats living within city limits.) Part of P-22’s appeal is the initial surprise; most people don’t think of pumas as one of the city’s iconic features, but they are here, just like palm trees, juice bars and traffic. And these top predators were here long before the Walk of Fame or the freeways, which now bisect their original territories into isolated areas that suffer from “inbreeding depression.” Pumas are trapped in a genetic prison, and male pumas, confined in too little space, kill one another at alarming rates. All of L.A.’s pumas are in peril—and if factors don’t change, they could be extinct in 50 years. But it’s P-22’s story that stands out and might just save all of L.A.’s puma population. “His story is an inspiring one about survival that is very relatable to people of all backgrounds. He is the hero that Griffith Park and L.A. wildlife need now more than ever,” writes Miguel Ordeñana, a wildlife biologist at the Natural History Museum, in the book We Heart P-22: A Coloring + Activity Book Celebrating L.A.’s Most Famous Mountain Lion (full disclosure: I am one of the book’s editors and a creative partner in the publisher, Narrated Objects). 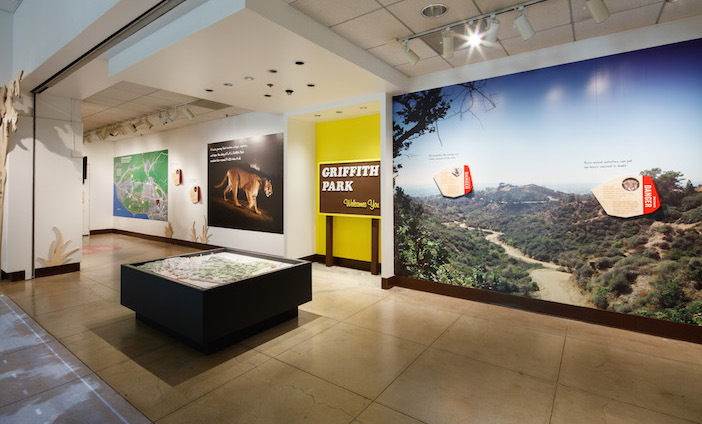 The Natural History Museum’s “The Story of P-22: L.A.’s Most Famous Feline” exhibition.

Ordeñana ought to know; he’s the scientist who first spotted P-22 in Griffith Park and has been following the puma’s movements ever since. In 2012, Ordeñana was reviewing photos from a camera trap installed in the park as part of a connectivity study. When a giant puma butt crossed his screen, he knew it was something special—a discovery he likens to finding Bigfoot because it was so improbable. To get from his home in the western Santa Monica Mountains to Griffith Park, P-22 had to cross two major freeways—the 405 and the 101—a challenge no known puma had ever successfully navigated.

P-22 not only beat the odds to get to Griffith Park but also continues to survive there, which is a bit of a surprise, too. Although Griffith Park is one of the largest urban parks in the U.S., with 53 miles of hiking trails and iconic attractions like the Hollywood sign and Griffith Observatory, it’s not a sizable habitat for a big cat. Male mountain lions typically require about 200 square miles; in Griffith Park, P-22 has only 8 square miles to call home. By lion standards, he’s stuck in something smaller than a studio apartment—pinned in on all sides by freeways—a lone lion with no hope for a mate unless he risks crossing another freeway (or another lion risks crossing one for him). Plus, his tiny territory is infested with humans—an
estimated 10 million visit the park each year, and they don’t just disrupt his daytime sleeping routine but also poison the ecosystem with rodenticides that end up working their way up the food chain to him (P-22 nearly died from exposure to rat poison in 2014).

Beth Pratt-Bergstrom is the National Wildlife Federation’s California regional executive director, author of the book When Mountain Lions Are Neighbors and a P-22 bestie (she runs his social-media accounts and has a tattoo of the puma on her arm). In her work, Pratt-Bergstrom points out that Angelenos identify with P-22 because he shares many of the same plights we do. Living alongside some of the country’s most expensive real estate, he’s squeezed by the housing crisis, just like the rest of us. Although he’s found a comfortable and safe place to call home, it’s smaller than what he needs, and he risks eviction. Plus, like many humans, his love life is thwarted by a lack of suitable mates (sigh … that’s dating in L.A.). No wonder so many of us are fervent fans. For a creature that could kill and eat you, P-22 is one likable predator. Hopefully the empathy humans feel for the plight of this puma will result in protecting his habitat and solidifying plans to build a wildlife crossing over the 101 Freeway, so that other pumas don’t get stuck in a fragmented habitat the way P-22 is. (Pratt-Bergstrom raises funds for this bridge with her savelacougars.org campaign.)

I live down the street from Griffith Park, and the affection some kids feel for fictional animals like Chuck E. Cheese or Mickey Mouse, my kids feel for the real P-22. He is our city’s mascot, and, like a Dodger Dog or street taco, he brings people together.