66°F
You are at:Home»Blog»Adventure Off the Beaten Path with Trippy LA Tours 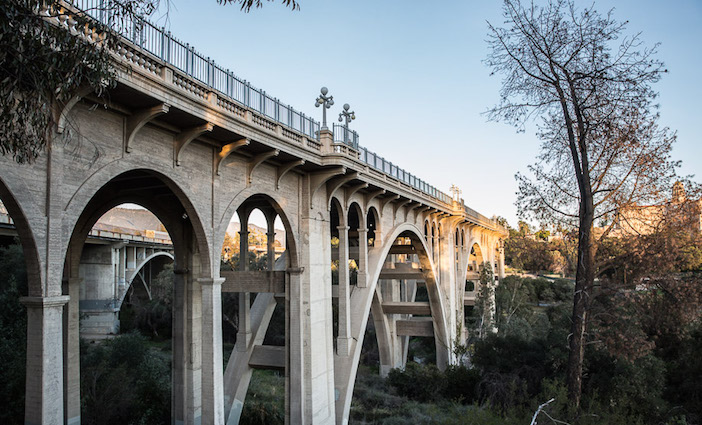 Learn about the Colorado Street Bridge’s dark history in a tour by Esotouric.

In an interview, Pulitzer Prize-winning food critic Jonathan Gold said, “The most authentic Los Angeles experiences tend to involve a mild sense of dislocation, of tripping into a rabbit hole and popping up in some wholly unexpected location.”

It’s true that you can get lost in L.A. even when you know exactly where you are geographically. The city has layers of history; peel one back, and the familiar becomes odd, recognizable landmarks suddenly extraordinary. Take the iconic Hollywood sign, an emblem that inspires millions of people a year to trek into the surrounding hills in search of an ideal photo spot. It’s as much of an official welcome mat as the city has, but while some folks know of its origin as an advertisement for a real estate development (it originally read “Hollywoodland”), few know that in 1932 a young actress used the “H” as a launchpad for her suicide. Suddenly the jovial sign doesn’t seem so sunny.

This displacement isn’t just suffered by outsiders; tourists and native Angelenos alike feel it—the  trippiness of the unexpected twist, whether it’s about a place they’ve never seen before or the house next door. Which is why tours that highlight specific aspects of the city—be it architecture, film history or true crime—are so popular. Instead of broad overviews, guests get a deep dive into a single subject, some more offbeat than others. Esotouric, run by third-generation Angelenos Kim Cooper and Richard Schave (who lead all of the tours as a team), offers an eclectic range of bus tours, including an immersive Real Black Dahlia tour and the Lowdown on Downtown. The venture evolved from a crime blog the couple used to write, and while many of its tours focus on true crime, Esotouric tends to emphasize the strange delinquency of ordinary citizens rather than celebrities because, according to Cooper, “nobody needs to hear about O.J. Simpson again.” The company’s repertoire spans the literary and musical worlds as well, with four-hour excursions devoted to uncovering the Los Angeles of Raymond Chandler, John Fante, Charles Bukowski and Tom Waits.

The majority of the folks on the Esotouric bus are residents of Southern California—a fact made obvious by the name tags guests wear that list the neighborhoods in which they live. Still, while Cooper acknowledges  that many Esotouric patrons are locals, she says, “we get a lot of tourists from Australia and Canada, and  they appreciate the opportunity not just to go to Hollywood and downtown and the usual places … They love that we take them to El Monte and show them places that they would never get to on their own.”

Hopping on the chartered bus for a jaunt with Esotouric is like being in a Thin Man movie, minus the booze. Cooper and Schave banter, engaging riders not just with content, but in form. They are skilled raconteurs and thoughtful hosts, providing cookie breaks en route to some of the tours’ more macabre stops. In the case of the tour I took of Pasadena, one such site was a park next to the Colorado Street Bridge, famed as the “Suicide Bridge.”

“L.A. is a really interesting place,” says Cooper. “If you’re interested in almost anything about 20th century culture, you’re gonna find it here, and the stories and characters who come here, and the way that they interact with each other and get into trouble. Los Angeles history is incredibly colorful.” 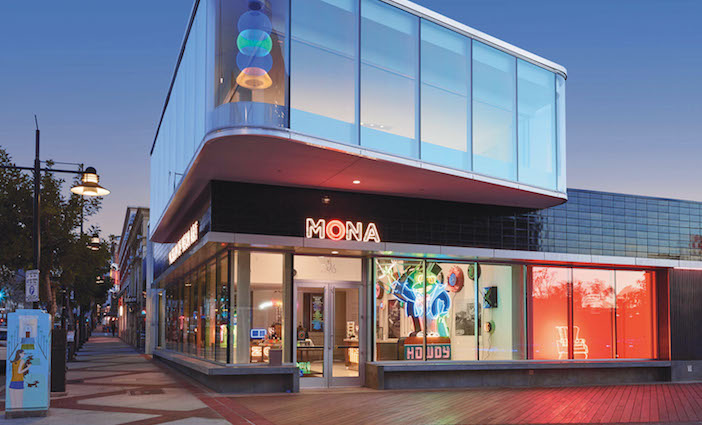 Plan ahead to catch monthly tours at the Museum of Neon Art.

Sometimes it’s not just the characters and stories that are colorful—it’s the actual sights. Glendale’s  Museum of Neon Art helms its own bus tour: a Neon Cruise of the city’s most fabulous neon signs. These monthly tours (twice a month in the summer) sell out quickly, so plan ahead. Guides include author J. Eric Lynxwiler, who literally wrote the book on the subject, Spectacular Illumination: Neon Los Angeles 1925-1965. Highlights include original shop signs in Chinatown,  the Los Angeles Theatre downtown and Hollywood’s best dive bar, Frolic Room, which boasts a multicolored sign that, like the joint’s strong drinks, knocks visitors slightly off-kilter.

Other nonprofits, museums and institutions  feature such specialized tour experiences, highlighting specific parts of their collections or grounds. The  Los Angeles Conservancy, a nonprofit advocacy group for historic preservation, has long been known for its Saturday-morning walking tours, which feature different neighborhoods, specific buildings or architectural styles. A docent-led, 2.5-hour stroll around downtown allows an in-depth look at art deco architecture (breathtakingly beautiful buildings such as the Eastern Columbia  Lofts and the Oviatt Building included). The Jazz Age  is suddenly as accessible as a Starbucks coffee, and  yet so much more glamorous. The Conservancy’s downtown tour focused on Broadway’s Historic Theatre District serves as a fantastic mashup for those interested in both neon and art deco movie palaces. Some  of these opulent theaters, which endured decades  of neglect and remain mostly shuttered as film venues, have staged serious comebacks (the former United  Artists flagship has been restored as part of the Ace Hotel Downtown Los Angeles, for instance). 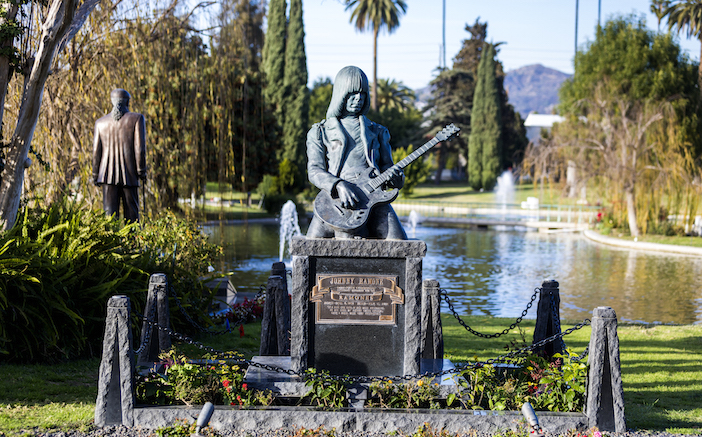 Paramount’s After Dark Tour: Takes From the Other Side ends in the Hollywood Forever Cemetery.

Film-studio tours, mainstays of the city’s tourism industry, are even getting into the act, creating new tours that focus on specific eras of film history or are geared toward the interests of a more targeted audience. Warner Bros. has a new Classics Made Here tour focused on the studio’s history during Hollywood’s Golden Age. Similarly, Paramount, the oldest studio still in Hollywood, offers the Paramount After Dark Tour: Tales From the Other Side, a 2.5-hour walking tour that starts with a glass of Champagne and ends in the neighboring Hollywood Forever Cemetery. In between, as guests wander through the studio, hearing about haunted soundstages and making stops in both the prop warehouse and the backlot, a larger narrative is woven about how the decadence of the studio’s silent-film-era stars led to the development of the Motion Picture Production Code (spoiler alert: Fatty Arbuckle and Mabel Normand have starring roles). Spending the evening with a handful of strangers, a flashlight and the graves of long-dead movie stars is surprisingly tranquil. Plus, classic movie snacks like Red Vines are provided. 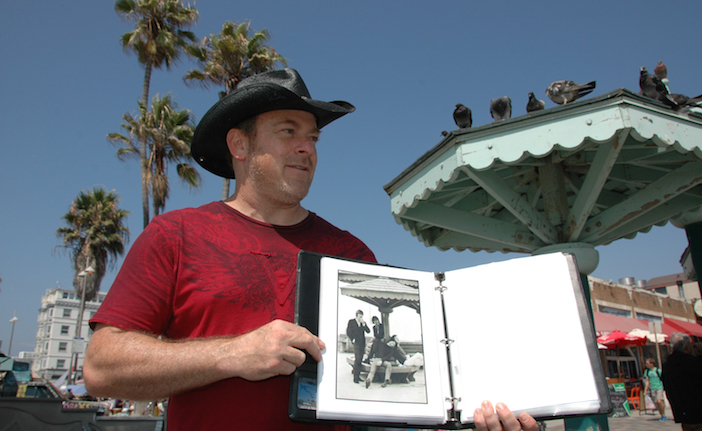 Step back in time with a tour of Venice from history guru Jonathan Kaplan.

The most important element of any tour is the presence of a passionate guide; it helps if he or she is funny, too. And, like any specialty good, a tour that caters to very particular tastes needs to be delivered by its maker with a sense of almost religious zeal for the subject matter. Jonathan Kaplan is such a man. A 20-year resident of Venice and recent recipient of a master’s degree in historical preservation, he is out to spread the gospel of Abbot Kinney, the eccentric founder of what was once known as Venice-by-the-Sea, with his Vintage Venice Reel-to-Real Tours. Combing through 105 years’ worth of film history, Kaplan seems to have found every instance of the seaside town ever recorded on celluloid. In his two- to three-hour walking tours, he’ll show you film clips and vintage photographs on an iPad at the sites of origin. A highlight is seeing the remains of a door that once opened into a tunnel, part of Kinney’s original canals, used during Prohibition to run liquor from boats in the Santa Monica Bay into a grocery store. The story, as Kaplan tells it, would make a fantastic film. Today, the site where the grocery store once was is a bar, one of the oldest in L.A., and the basement has been transformed into a speakeasy—that’s right, a faux speakeasy where a real one once was. And that is just the sort of trippiness a good tour of L.A. can uncover.