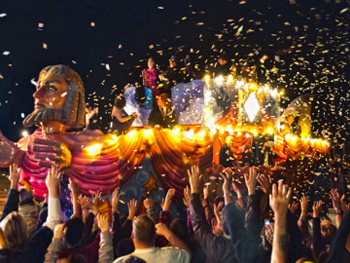 In San Diego, Mardi Gras is more than an excuse to party on a Tuesday night. We’ve rounded up the top five New Orleans-inspired events happening all weekend long.

Bacchus Night
Mar. 2. Join Urban Solace, Bar Pink and True North Tavern in their raucous attempt to bring the spirit of New Orleans to North Park. Block Party wristbands get you access to the crawfish boil, gumbo fest and Euphoria Brass Band at Urban Solace; BBQ oysters and Theo & The Zydeco Patrol at Bar Pink; and hush puppies and Billy Lee & The Swamp Critters at True North. Enter the costume contest for a chance to win $150 in prizes and the opportunity to lead the parade as Drum Major. 5-9 p.m. 30th Street parade begins at 8 p.m. Urban Solace, 3823 30th St., San Diego. 619.295.6464. facebook.com

Hillcrest Mardi Gras
Mar. 4. Always a place with fun-filled nights and eye-catching spectacles, Hillcrest is bringing the excitement of New Orleans and Mardi Gras to the street of University. Hillcrest Fat Tuesday will feature a dance party, gourmet food vendors, street performers, an outdoor nightclub, DJs and for the first time ever, a parade reminiscent of the one in NoLa. All-ages parade from 6-6:45 p.m. 21+ street party from 7-11 p.m. University between 10th Avenue and Herbert Street. fabuloushillcrest.com

San Diego Mardi Gras Parade & Celebration
Mar. 4. The Gaslamp Quarter pulls out all the stops for the most vibrant block party of the year, complete with performers, a parade and plenty of beads. Twenty-two city blocks within the venue will feature three main stages and three satellite stages showcasing live DJ entertainment with an intense sound system, vibrant lighting and LED spectacle. Now celebrating its 20th year, the Big Easy Parade will travel eight blocks down Fifth Avenue, culminating in a special DJ set from the show stopping DJ Snoopadelic. Enter at Market Street and Fifth Avenue, San Diego. sdmardigras.com