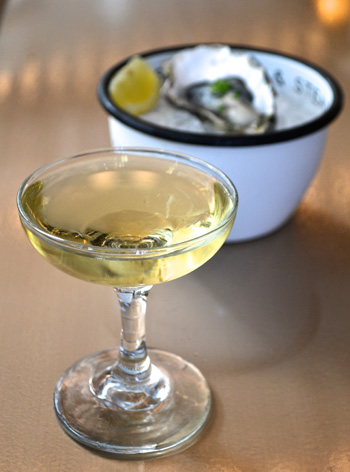 Seafood lovers, we’ve located your new mother ship: Ironside Fish & Oyster—easily San Diego’s most anticipated new eatery of the year. The raw bar, bakery and restaurant, which recently opened in the heart of Little Italy, is the most ambitious culinary-focused foray to date by CH Projects. (The same team opened some of the city’s most popular haunts, including Craft & Commerce, Neighborhood, Underbelly, Polite Provisions, El Dorado, Soda & Swine and Noble Experiment.)

Think of Ironside as similar in style to New York’s famous Balthazar Restaurant, but tricked out with steampunk-style design elements (read: lots of metal) dreamt up by CH leader Arsalun Tafazoli and local designer Paul Basile—whose influence can be felt throughout every single square foot. Features of the 4,500-square-foot, 1920s-era former warehouse include soaring, loft-like ceilings; custom, plasma-cut barstools; copper tabletops; a 14-foot-tall, overarching steel bar trellis; five massive floor-to-ceiling steel flip doors at the front of the building; and a 15-foot marble countertop near the open-air kitchen (one of the restaurant’s three culinary hubs) that doubles as a communal table. Even the custom flooring boasts small inlaid floor lights shaped like anchors. The overall effect is equal parts modern, urban, nostalgic and nautical. Most evenings, Tafazoli can be found casually strolling through the restaurant, quietly triple checking that every single detail is perfect.

At Ironside, it’s all about the oysters … and the cocktails. Its “Cocktails on the Half Shell” menu lets you have the best of both worlds, pairing one of three distinctive cocktails with a different oyster shooter. Our favorite is the Golden Rivet: Fino sherry combined with Cocchi Americano and Champagne. It’s a cocktail with depth that opens up the flavor of the oyster, but also just light enough to sip as the weather gets warmer. The rest of the cocktail menu reads like a tiny encyclopedia of unique concoctions mixed with the classics. Another favorite is the Mai Tai served inside a custom Shamu mug.

In comparison to the cocktail menu, the food menu is fairly simple. Jason McLeod, a double Michelin star honoree, leads a talented culinary team as Ironside’s executive chef and partner. The menu consists of a handful of raw starters, including a selection of oysters on the half shell; fresh catches such as salmon, sea bass and swordfish served a la carte; a single steak entrée; and sides such as asparagus topped with a hen egg and crispy seasoned fries. The lobster roll is a standout, made with huge fresh lobster chunks in a light dressing loaded inside a Texas toast-style bun. A separate raw bar serves up oyster flights, crudo, crab claws and seafood platters from a menu that changes daily.

The vibe at Ironside feels very “big city”—bustling, loud, energetic and stylish. If you’re a fan of sea fare and impeccably crafted cocktails, you’ll definitely be inclined to drop anchor and stay for a while. 1654 India St., Little Italy, 619.269.3033. ironsidefishandoyster.com