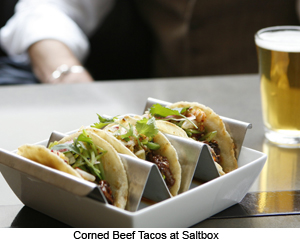 From block parties, parades, Irish pubs and craft beers, to corned beef tacos, San Diego won’t be pinched for lack of St. Patrick’s Day spirit! Here’s a roundup of where you can join the festivities.

The Field
March 17. For an authentic taste of Ireland in the comfort of sunny San Diego, check out The Field Irish Pub. Open from 9 a.m. to 2 a.m. the next morning, the turn of the century Irish pub brings out all its signature dishes for the festivities. The pub was shipped piece by piece from Ireland before being relocated in the heart of San Diego’s Historic Gaslamp Quarter. 544 Fifth Ave., Gaslamp Quarter, 619-232-9840 thefield.com

Draft Republic
March 17. Celebrate the one day that everyone is Irish at Draft Republic. The “Lucky Leprechaun Special” features house-made corn beef sandwich, a Guinness tall boy and a shot of Irish whiskey for $15/pp. 4282 Esplanade Court, La Jolla/UTC, 858.450.1400. cohnrestaurants.com

Saltbox
March 17. At Saltbox, partake in traditional St. Patrick’s Day cuisine with their special corned beef tacos, offered all day for $2 and served with pickled cabbage and mustard aioli (pictured above). For libations, diners can grab a handcrafted cocktail such as the “Outsageous” with sage liquor, Absolut, lime juice, and house-made cranberry syrup, or the “Culpearit” with gin, house-made pear syrup, skins and lemon. 1047 Fifth Ave., Gaslamp Quarter, 619.515.3003. saltboxrestaurant.com