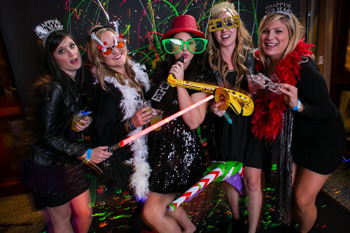 Celebrate New Year’s Eve in America’s Finest City. Whether you’re looking for a night on the town or a more intimate celebration, San Diego has plenty of options to help you ring in 2014.

The Bivouac
The US Grant’s New Year’s Eve soiree returns for another year in San Diego’s original speakeasy to provide an upscale and more intimate alternative to the nightclub scene. The famous Celestial Ballroom will feature a live band and DJ, complimentary champagne  from 9-10 p.m and a midnight toast. 326 Broadway, San Diego. 619.232.3121. usgrant.net/calendar-of-events

Bottoms Up 2014
The San Diego Marriott Gaslamp Quarter will debut City Sights, the new rooftop expansion to Altitude Sky Lounge, at its signature Bottoms Up New Year’s Eve bash. Begin the celebration on the ground floor  with a generous buffet boasting an array of cuisines and decadent desserts in the lobby before heading up to the 22nd floor for hosted well drink, dancing to Top 40 hits from live DJs and a midnight champagne toast. 8 p.m. $165+. City Sights and Altitude Sky Lounge at the Marriott Gaslamp Quarter, 660 K Street, San Diego. 619.696.0234. bottomsupnye.com

Happy DEW Year at Quality Social
The downtown locale is teaming up with one of Ireland’s most widely distributed whiskies, Tullamore Dew, to make this New Year’s Eve a night to remember. Enjoy an open bar from 9-10 p.m. and complimentary champagne or pickleback shot at midnight. DJ Hevrock will be spinning tunes into the new year. $40+/pp. Quality Social, 789 Sixth Ave., San Diego. 619.501.7675. qualitynye.eventbrite.com

Midnight Kiss New Year’s Eve
Spend the last night of 2013 in the lap of luxury with a six-hour open bar, rooftop champagne toast at midnight and dancing in a ballroom with panoramic views of downtown and the harbor. A live DJ will be playing hits all night. 8 p.m. Bristol Hotel, 1055 First Ave., downtown. 619.232.6141. sdnewyears.com

New Year’s Eve Dance Party Cruise
Sail into the new year with the sights of San Diego Harbor as your backdrop. Dance the night away on a beautiful yacht with live entertainment, gourmet appetizers and premium bar selections. Board at 9:30 p.m. $62.50/pp. 990 North Harbor Drive, San Diego. 619.522.6155. flagshipsd.com

New Year’s Eve Pub Crawl
Ring in 2014 at several of the best bars in the Gaslamp Quarter with Taste & Thirst’s famous annual pub crawl. Take advantage of drink specials at each location, including $4 wells, two for $14 premium drinks and two for $14 champagnes. $20. Check in by 10 p.m. Taste & Thirst, 715 Fourth Ave., San Diego.  wantickets.com

The White Party
Held in the former Block No. 16, The White Party invites you to toast to the new year with the legendary DJ Donald Glaude, Mr. Dee Jay, DJ Tantrum, DJ Kray-Z-K and Discotech Panda. Indulge in a premium hosted bar from 8-10 p.m. All white attire is requested. $60. Moonshine Flats (formerly Block No. 16), 344 Seventh Avenue, San Diego. 619.370.3929. whitenyesd.com