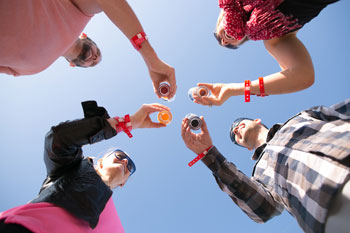 The region’s largest craft brewing event returns for its fifth year with ten days of cask nights, beer festivals and everything in between from Nov. 1-10.

San Diego is a beer town, no doubt about it. And with more than 60 participating breweries and 600 different events, navigating the holy week—San Diego Beer Week—can be a difficult task. From pairing dinners to the annual Brewers Guild Festival, we’ve rounded up the biggest and best events to help you make most of San Diego Beer Week this Nov. 1-10. If you’re looking for something to do in San Diego this weekend and love beer, this is your spot. See the complete list of events here: sandiegobrewersguild.org/events

A Night of Craft Beer, Food Pairing, Education and Interaction
Nov. 6. Ballast Point, Hess Brewing, Modern Times and Saint Archer will be in attendance for this evening of craft beer, food pairings and education. Set up as a free-flow tasting dinner, attendees will have an opportunity to enjoy eight unique craft beer and gourmet food parings at their leisure, talk with the chefs and brewers, and learn about the history of San Diego’s craft beer culture. The event also includes entrance into the “Bottled & Kegged: San Diego Craft Beer Culture” exhibit. 6-9 p.m. $69. San Diego History Center, 1649 El Prado, Suite #3, Balboa Park.

Master Pairing Beer Dinner with The Lost Abbey
Nov. 7. The Lost Abbey is widely revered for its painstakingly crafted abbey-style ales and barrel-aged beers. This spectacular seven-course meal is no different. Stone’s “Dr.” Bill Sysak has paired each dish with two of the best beers The Lost Abbey has to offer, many of which are rare and highly sought after. 6:30-9 p.m. $79. Stone Brewing World Bistro & Gardens, 1999 Citracado Parkway,  Escondido. 760.471.4999.

Beer Garden
Nov. 10. The closing reception to SDBW is a gourmet beer and food-pairing event featuring 12 renown chefs and 24 local breweries. Each chef will be matched with two breweries and will prepare a dish that pair perfectly with each beer. Tickets include unlimited tastes. $75/pp. 12-3 p.m. The Lodge at Torrey Pines, 11480 N Torrey Pines Rd.