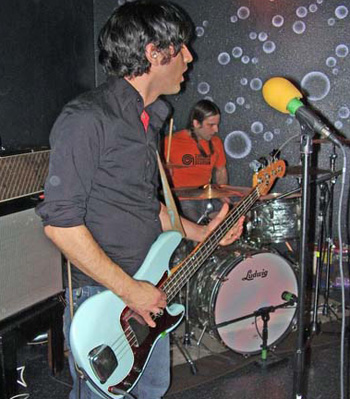 From live jazz and alt-indie rock to hip-hop and funk, America’s Finest City is ripe with live music of all shapes and sizes. Here are our top 18 music venues in San Diego for your listening pleasure, in no particular order.

Casbah
San Diego’s most authentic rock club, the Casbah recently celebrated its 25th anniversary. Catch big names on their way up; legends such as Nirvana, The Arcade Fire and Rocket from the Crypt have all graced the Casbah stage before hitting it big. The intimate venue (200 person capacity) includes an enclosed smoking patio; a back room with pool tables, pinball and the classic video game Galaga; and a full bar. 21+. 2501 Kettner Blvd., Midtown, 619.232.4355. casbahmusic.com

The Observatory
The original home of the North Park Theatre, The Observatory North Park offers a cool, vintage vibe and top acts. Located just behind West Coast Tavern, concertgoers can first enjoy the gentrified North Park neighborhood before rocking to a show. The theatre was built in 1928 and has now been fully renovated to include a new tiered and open floor with room for 1,100 concertgoers. 2891 University Ave., 619.239.8836. North Park, observatorysd.com

Viejas Arena
Home to the San Diego State Aztecs, Viejas Arena doubles as a top-notch music venue, having hosted the likes of The Foo Fighters, Green Day and Trans-Siberian Orchestra. With the stage usually erected at the rear end of the arena, nearly every seat has a prime view. At SDSU, 5500 Canyon Crest Dr., San Diego. as.sdsu.edu/viejas_arena

Belly Up Tavern
The Belly Up Tavern is a dymanic all-genres club. One night may be rocking in tribute to Johnny Cash while the next is mellowed out with the singer-songwriter sounds of Donavon Frankenreiter. Seats aren’t guaranteed at this intimate North County venue, so arriving early is your best bet. 21+. 143 S Cedros, Solana Beach. 858.481.8140. bellyup.com

House of Blues
A staple in the music scene in most major cities, the House of Blues San Diego is no different. The standing-room only venue can get pretty packed, but you can usually skip the line to get in if you dine at the attached restaurant. 1055 Fifth Ave., San Diego. 619.299.2583. houseofblues.com

Whistle Stop
Don’t think for a second that this hipster heaven is a one-note wonder. The Whistle Stop brings in live talent of all genres, from ‘60s glam to Brit-rock to ‘90s hip-hop spun by local DJs during the immensely popular Booty Bassment. The cash-only bar also features a sizeable dance floor, so you can shake your groove thing no matter the beat. 21+. 2236 Fern St., San Diego. 619.284.6784. whistlestopbar.com

Seven Grand
Jazzphiles and neophytes alike flock to North Park’s über-hip whiskey bar for the live jazz. On a small stage in the back half of the bar—or “the library”—jazz artists and ensembles perform most weekends. Its tucked-in front door is easy to miss; the giant spinning street-corner sign is not. 3054 University Ave., San Diego. 21+. 619.269.8820. sevengrandbars.com/seven-grand-san-diego

Copley Symphony Hall
Originally opened in 1929 as the Fox Theatre, Copley Symphony Hall (inside the Joan and Irwin Jacobs Music Center) is equipped with state-of-the-art digital sound and lighting technology as well as a full-sized Robert Morton pneumatic pipe organ, making it the perfect home for the San Diego Symphony. More than 39 front row seats are available, with another 2200 to accommodate classical audiences of all sizes. 750 B St., San Diego. 619.235.0804. sandiegosymphony.org/copleysymphonyhall

Soda Bar
This dive on El Cajon Boulevard is a fixture for up-and-coming San Diego musicians. You could literally reach out and touch the band in this intimate setting, but it’s not recommended. 21+. 3615 El Cajon Blvd., San Diego. 619.255.7224. sodabarmusic.com

Soma
One of San Diego’s only all-ages clubs, Soma’s vast warehouse space is divided into two disproportionate rooms to accommodate both bigger and more intimate performances. Shows typically fall in the alternative/indie genre, but Soma has been known to break the mold every now and again. 3350 Sports Arena Blvd., San Diego. 619.226.7662. somasandiego.com

The Irenic
“San Diego’s neighborhood venue” is literally smack dab in the middle of residential North Park. A church by day, The Irenic is a new space with great acoustics that show-goers of all ages can enjoy. Profits benefit Street Angels, an organization that focuses on helping homeless youth and teens in the City of San Diego. 3090 Polk Ave., North Park. theirenic.com

Humphreys Concerts By The Bay
This 1,400 seat outdoor theatre generally runs from May through October, when the weather is ideal for its bay-front location. A San Diego live music staple since 1982, Humphreys Concerts covers the total spectrum from rock, jazz, and blues to folk, international music and even comedy. Everyone from Willie Nelson to Rob Thomas to Kathy Griffin has graced Humphrey’s stage. 2241 Shelter Island Drive, Shelter Island. 619.224.3577. humphreysconcerts.com

Balboa Theatre
Built in 1924, the historic Balboa Theatre was an elegant vaudeville and movie palace in the heart of downtown San Diego. Today, it’s been renovated into a community performing arts center that attracts talent of all types. The theatre doubles as an anchor to Horton Plaza. 868 Fourth Ave., San Diego. 619.570.1100. sandiegotheatres.org