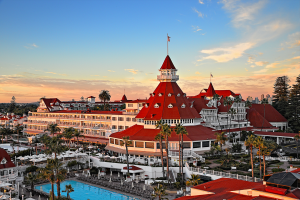 Happy 30th Anniversary to the 1986 classic, Top Gun! Here’s how you can celebrate the classic San Diego film.

Hotel Del Coronado
May 13. In honor of the classic film’s anniversary, Hotel Del Coronado has lined up a full day to celebrate. The hotel will start early with a Top Gun Beach Spin Class with beautiful views of the Pacific, set to the beat of Top Gun soundtrack remixes. Later, the hotel will feature Top Gun-themed cocktails, specialty spa treatments, photo ops, and live music. Once the sun goes down, the 80’s flick will show on the big screen on the Del’s Windsor Lawn with complimentary open seating. 1500 Orange Ave., Coronado. hoteldel.com

Kansas City BBQ
May 15. The iconic venue for the Top Gun bar scene, complete with the piano (in which Goose plunked out “Great Balls of Fire”), is a shrine full of Top Gun memorabilia. Just blocks from the San Diego Marina, the BBQ joint features indoor and outdoor seating, a casual vibe and some smoking BBQ bites. kcbbq.net

The LOT Liberty Station
May 13-18. Brand-new to one of San Diego’s hottest neighborhoods, The LOT Liberty Station was previously the historic Navy Training Center’s Luce Auditorium and the set for several scenes from Top Gun. To celebrate the film’s 30th anniversary, the luxury theater will be screening the movie each night at 6:45 p.m. Guests can sit back in the reclining leather seats, order food and beverages from the comfort of their chairs and feel like part of the action as Maverick and Goose soar. 2640 Historic Decatur Rd., Liberty Station, thelotent.com

The Lafayette Hotel, Swim Club & Bungalows
May 13-14. From the venue that brought audiences the famous “You’ve Lost that Lovin’ Feeling” Top Gun scene, The Lafayette Hotel, Swim Club & Bungalows invites guests to celebrate the film in throwback style. Attendees will enjoy poolside DJ sets by Goose & Mavrk, before catching the free screening of Top Gun at 8 p.m. The Mississippi Ballroom will feature a karaoke contest with Dance N Groove DJ’s with fabulous prizes up for grabs. The hotel will also showcase specialty cocktails named after characters from the film, including the “Maverick” with amaretto, Galliano, vodka and pineapple; the “Viper” with amaretto, Crown rum, sour peach, SoCo, vodka and pineapple; and the “Iceman” with Malibu rum, Captain Morgan and coke. 2223 El Cajon Blvd., North Park. lafayettehotelsd.com