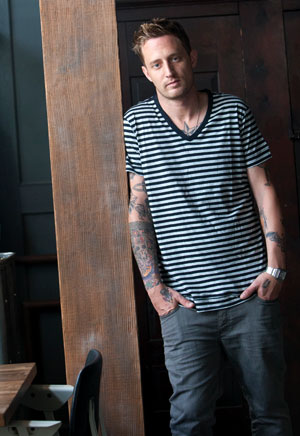 Since he made the final cut to win season six of the Bravo reality series Top Chef in 2009, Los Angeles Chef Michael Voltaggio has carved out an enviable career in the L.A. dining scene. He had an acclaimed run as executive chef of the Bazaar by José Andrés before wowing diners with his innovative, molecular gastronomy-enhanced New American cuisine at the Dining Room at the Langham, Huntingon Hotel in Pasadena.

Ink is one of the most anticipated restaurant openings in town. What was the inspiration for it?

I think, better than trying to be like the nicest fine-dining restaurant in the world, it’s taking the lead from some of the ethnic restaurants here and sort of just elevating that experience, and celebrating it, and recognizing the fact that it’s about the people that are coming in the restaurants, and about making the experience accessible.

You could have opened a restaurant anywhere. Why L.A.?

Looking past like the stereotypes of Los Angeles, you realize some of the most creative people in the world are here. Whether it’s “the industry,” music, fashion, food, art—there’s so much here.

You’ve worked for many acclaimed chefs. Who has influenced you the most?

As far as work ethic, I would definitely give that to Charlie Palmer. He’s the guy that basically taught me the lesson of, “Don’t rely on other people to get everything done for you.” I’ve watched Charlie like take apart the ice machine and fix it…. Probably the one person that influenced my cooking the most … is Arnaud Berthelier. I worked with him at the Ritz-Carlton in Naples and he’s the one where I looked at his food and I was like, “I want to cook like that.” And then, obviously, José Andrés, and just his kind of whimsical, fun approach.

Surely you love to go out to eat. Any favorites around town?

We like to go downtown and eat ramen. That’s one of our favorite things, to go on 1st Street and eat at Daikokuya, go eat Thai food at Jitlada, or go get tacos…. I love Bouchon in Beverly Hills, and I love the idea of going up there and dressing up a little nicer than I normally would.

How else do you relax?

We probably go out and try cocktails at different places every night. I just went to Harvard & Stone for the first time, I thought that was really cool. I still like The Roger Room. If I go downtown I like to go to The Varnish. I love to go to the beach…. That’s the one thing I miss about not living in Santa Monica [anymore] is being able to just grab my surfboard and go down and go surfing.

I didn’t realize that you surf.

I’m not going to pretend like I’m a good surfer. I started learning to surf at Ocean Park, which I wouldn’t even consider to [have] waves. I mean, I’m still sketched out by the ocean, you know? I’m not out there like, “I don’t care! I’m not afraid of anything!” Like, I definitely am afraid of dying in the water.

You recently got to throw the first pitch at a Dodger game.

Yeah, that was kind of a rivalry thing between my brother and I. He called me one day and he was like, “I got to throw the opening pitch at the Frederick Keys game,” which is a minor league baseball team in Frederick [Md.], which is where his restaurant is. I called [my publicist] and I’m like “Joy, I want to throw a baseball! Bryan threw a baseball!”