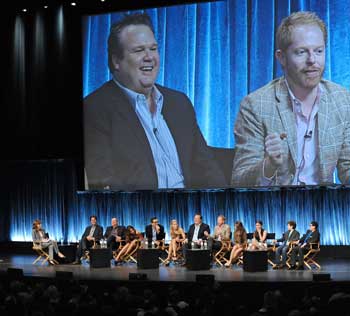 The 15-day-long PaleyFest—the biggest to date—gives you an inside look at top TV shows through panel discussions and premiere screenings.

Do you pepper conversations with lines from The Big Bang Theory? Are you emotionally invested in Parenthood? If so, or if you’re the ultimate fan of another popular TV shows such as The New Normal, The Mindy Project, or Revolution, clear your calendar for the 30th annual PaleyFest, the William S. Paley Television Festival at the Saban Theatre in Beverly Hills. TV viewers and industry insiders get together with media icons and the casts and creative teams behind hit TV series in interactive panels and premiere screenings. Kicking off the festival is a presentation from The Walking Dead, and a presentation from American Horror Story: Asylum closes it out. In between, don’t miss a live table read from the cast of Community—just one highlight from the stellar lineup, which follows:

In addition, there are several ways to take part in PaleyFest if you can’t snag tickets. For the first time ever, the stars and producers of The Walking Dead and comedy series The Big Bang Theory are coming to theaters nationwide as part of the ultimate TV fan festival. PaleyFest Featuring ‘The Walking Dead, the festival’s opening night presentation, pre-recorded March 1, featuring appearances by the cast and creative team, will be broadcast to select U.S. movie theaters on Thursday, March 7 at 8pm local time; while PaleyFest Featuring The Big Bang Theory, broadcast LIVE from the Saban Theatre in Beverly Hills, on Wednesday, March 13, at 10pm ET / 9pm CT / 8pm MT / 7pm PT, will feature a live and uncensored Q&A with the cast and producers of TV’s most-watched comedy. Movie theater audiences will have the opportunity to submit questions to The Big Bang Theory panel live via Twitter. Find tickets for these events online at FathomEvents.com.

Hulu will also stream full-length panel content and short form clips, exclusively on-demand from each PaleyFest panel on Hulu, and Hulu Plus at hulu.com.