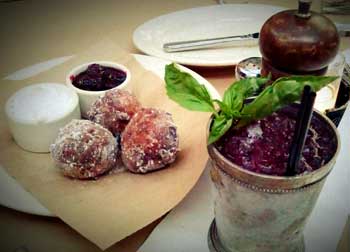 Although summer sneaks in and out of Los Angeles in varying capacities, there’s always a season for summer drinking and eating. Whether it’s a patio that has your name on it, a picnic you pack for the Hollywood Bowl, a Cinespia movie or concert in Hollywood Forever, here are the drinks and eats to enjoy for the rest of the summer.

Rosé
When we took a trip up to Santa Ynez in July we were on a mission for rose. Little did we know that it was oh-so-French to sip during the summer. But you don’t have to visit Demetria, Kohler, or Curtis (though we highly recommend that too) to find a decent rosé. Thursdays through the end of August, oenophiles can sip and savor four new French wines from Provence at “Summer Thursdays” at Fig & Olive—alongside open forum discussions with the vintners and a complimentary appetizer with the purchase of a glass of Côtes de Provence rosé ($10; one appetizer per guest; 5–7 p.m.). The Côtes de Provence Appellation d’Origine Controlee (AOC) is the largest appellation in Provence and is known internationally for producing some of the world’s best rosé wines.

Monsieur Marcel also does not disappoint in his selections of rosé. Carrying more than 500 different types of wine in their collection (more that 55 by the glass!) the farmer’s market and third street promenade locations give you many choices from which to pick. Through Aug. 31, get dealified at both Monsieur Marcel locations when you see a movie nearby. Moviegoers who present their ticket stub from either the Pacific Theatres at the Grove at Monsieur Marcel’s Farmers Market bistro, or the AMC Theatres at their Third Street Promenade bistro will receive free hors d’oeuvres with purchase of a glass of wine. Those visiting the Farmers Market location also have the option to present their movie ticket for 20% off a bottle of wine at Monsieur Marcel’s gourmet market.

Sake
We’re identifying a nascent movement toward sipping smooth delicious sake. Not too long ago Oregon based Momokawa Sake came to town to show Angelinos just what real sake can be paired with. During their dinner at Red O, six types of Momokawa sake—Silver, Ruby, Organic Nigori, Organic Junmai Ginjo, Pearl and Diamond—were paired with dishes like woodland mushrooms escabeche, chicken taquitos, angus skirt steak tostadas, crab and shrimp enchiladas, chicken in a homemade mole poblano, and chocolate-cocoanut tart. Who would have thought a traditionally brewed Japanese beverage could pair so well with Mexican flavors? It’s easy to pick up a bottle “Ginjo” (premium) grade sake at most LA Whole Foods locations and even easier to sip it alfresco, paired or mixed with your favorite ingredients. Momokawa’s Organic Junmai Ginjo is also the only saké in the country to be offered on tap at Pure Food and Wine in NYC. If you want it off a menu in LA, head to Mandarette.

Cocktails
Seems like everyone is offering crafted cocktails, but few establishments take the time to grow an herb garden on their roof, like Michael’s Santa Monica. Stop by through the summer for Farmacy Hours, during which when you gather in the lounge/bar area and mention “burrata,” you receive a complimentary Farm-to-Table Bar Bite of your choice, with the purchase of one of mixologist Jason Robey’s Farm-to-Glass signature cocktails.

Dominick’s pastry chef Ann Kirk recently teemed up with their mixologist Nikki Sunseri to pair cocktails with dessert (and we wondered why we never thought of trying that before). Pairings on their patio that made us extremely happy were the blackberry basil smash paired with ricotta fritters (pictured); Satan’s whiskers paired with melt-in-your-mouth chocolate panna cotta; and El Matador (El Jimador blanco, crème Yvette, pressed ginger, lemon and orange bitters) paired with a fruit filled rice pudding.

Beer
1739 Public House has more than 64 beers on tap. Stop by daily between 3-7, grab a seat on their patio, and order a free pizza to go with it.

Beer Belly has been an LA foodie hot bed lately. If you’re still not on the Craft Beer wagon, then definitely hit up their “Crap for Craft” event Aug. 28., bring in crap beer and in exchange one of their beertenders will hand you a fine brew from thir friends at Cismontane. On tap for that event will be: Citizen (Steam Lager), Black’s Dawn (Imperial Stout), Coulter IPA and Mystery champagne beer yet to be named.

Soak up the remainder of summer on Moko’s  patio and enjoy their $10 Beer + Bao social special (Mon.-Sat., from 5-7 p.m.), which includes a cold Hite brew and one of their tasty bao ssams such as Green Chili Pork Sausage with Pineapple, Cucumber, and Ssam Jang; Grilled Prawns with Red Onions and Avocado with Wild Arugula and Aji Amarillo Jang; Sweet Soy Braised Pork with Spicy Cress and Asian Pear, Sesame Aioli and Ssam Jang; and Sesame Duck Confit with Ripe Mango and Chipotle Jang.

Grab a seat on the courtyard at One Colorado (41 Hugus Alley, Pasadena, 626.683.3000) Saturdays in August for Red Sun Saturdays. Sushi Roku Pasadena transforms the patio into a pop-up beer garden and restaurant, perfect for watching the One Colorado music series, which features artists Michelle Bloom, Mia Doi Todd, and Katie Costello.

Chaya Downtown puts its own spin on a Japanese Beer Garden in the restaurant’s spacious outdoor patio. Offered every Monday through Friday from 5 pm to close, through Sept. 2, patrons can order pitchers of Kirin Beer or Asahi Dry and hard-to-find Japanese craft beers such as Ginga Kogen. Additional libations include specialty cocktails such as a Sake Sangria, weekly changing sake flights and single-malt Japanese whiskies. Chase though with special nibbles like a variety of Yakitori and Kushiyaki Skewers such as bacon date skewers, chicken, beef tongue, short rib, shrimp and more.