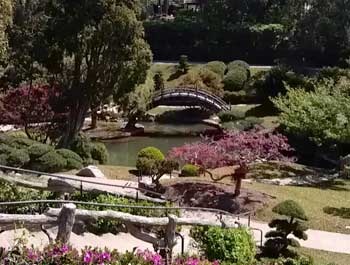 After a year-long, $6.8 million renovation, the Huntington Library, Art Collections, and Botanical Gardens in Pasadena, opens its iconic Japanese Garden to the public with new features and restorations.

Among whispering wisteria and babbling waterfalls, the Huntington Library opened its newly restored historic Japanese Garden, after the century-old site was closed for a year for a $6.8 million renovation.

The nine-acre Japanese Garden serves as an iconic backdrop at the Huntington, and includes a series of koi-filled ponds, a historic moon bridge, and a Japanese House, in addition to the new features of a ceremonial teahouse set in a new three-acre traditionally landscaped tea garden, waterfall, and increased accessibility.

The existing Japanese House, new ceremonial teahouse and moon bridge make up the main focal points of the garden. The latter of deriving its name from the enchanting full moon illusion the bridge and its reflection create in the pond.

The ceremonial teahouse was first commissioned in 1964 and shipped to the United States where it was reassembled on the grounds of the Pasadena Buddhist Temple. It was then donated to the Huntington, but first dismantled and shipped to Kyoto for refurbishment 2010. In 2011 it made its way back to California, where it was reassembled in the Huntington’s new tea garden. The ceremonies that will take place in the tea house follow the Urasenke Way of tea.

Other attractions of the garden include a bonsai court that showcases 70 trees; life-size half-dog-half-lion figures, which originated in Buddhist mythology and were used in ancient China to guard the entrances to important residences; and a zen garden, which includes a stand of ginko trees and a raked gravel dry garden that evokes a flowing stream.

Take a trip through the Huntington Library’s Japanese Garden: