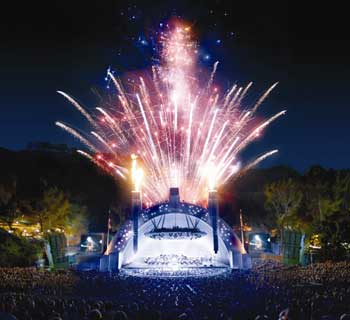 We were going to do a “Top 10” list of concerts not to miss at the Hollywood Bowl this summer, except there were too many fabulous shows to choose from. Below, find the Where Los Angeles roundup of must-see Hollywood Bowl concerts in 2012.

A Celebration of Miles Davis
Jun. 27. For nearly six decades, Miles Davis has embodied all that is cool, and this evening celebrates three of his many musical milestones. From an entire performance of the masterpiece Kind of Blue, through the ‘70s with the Miles Electric Band, to his pop-influenced album Tutu, we pay homage to the man with the horn.

Ben Harper, Fitz & The Tantrums
Jul. 1. After nearly a decade, singer-songwriter Ben Harper returns to the Bowl with his diverse style of blues-driven rhythms. Local all-star soul-rockers Fitz & The Tantrums warm up the stage with their vintage organ and irresistible songs.

Frozen Planet in Concert
Jul. 6-7. Making its world premier t the Bowl, the stunning new production is the ultimate portrait of the Polar Regions. The latest series co-produced by the BBC and Discovery Channel features spectacular images of the Arctic and Antarctic as you have never seen them before, with live orchestral accompaniment conducted by award-winning composer George Fenton.

The Producers
Jul. 27-29. From the brilliantly twisted mind of Mel Brooks comes this insanely funny adventure – a down-on-his-luck Broadway producer and his mild-mannered accountant concoct a get-rich scheme to bilk their investors out of millions by producing the most notorious flop in history. Based on Brooks’ Oscar-winning film, this Broadway smash hit and winner of a record-breaking 12 Tony Awards is the annual fully-staged musical at the Bowl. All-star cast to be announced.

Gustavo Dudamel & Yo-Yo Ma
Aug. 7. Gustavo Dudamel, the director of the LA Philharmonic, will appear alongside Yo-Yo Ma in a special performance of Schumann’s Cello Concerto. This program concludes with Dudamel leading the LA Phil in Tchaikovsky’s Symphony No. 4.

Norah Jones
Aug. 10. The multi-Grammy winning Norah Jones returns to the Bowl for the first time since 2004 in a one-night-only appearance. Her vocal versatility in pop, rock, country, and jazz has all the makings of a wonderful show.

Anita Baker, Esperanza Spalding
Aug. 22. Award-winning vocalist and songwriter Anita Baker brings her romantic, sophisticated grooves to the Bowl with classic hits such as “Sweet Love” and “The Best That I’ve Got.” Grammy-winning jazz bassist and singer Esperanza Spalding celebrates a funky new album to open the night

Sing-A-Long Sound of Music
Sep. 22. The Hollywood hills are alive with The Sound of Music! The popular Sing-A-Long returns to the giant screen at the Bowl – the world’s largest outdoor movie theater. Don’t forget to wear your costume for the pre-show parade as you warm your voice up for this popular event.

Wilco
Sep. 30. Wilco closes this summer season as a long-waited Hollywood Bowl headliner. Wilco will close the season on an unforgettably high with their unpredictably bittersweet sounds.