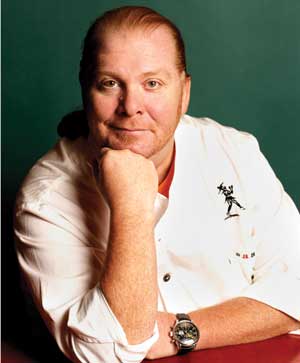 Internationally recognized chef Mario Batali dishes on Eataly in Los Angeles, his West Coast years and where he eats in LA.

Internationally recognized chef Mario Batali is well-known for his TV appearances, including the Molto Mario and Iron Chef America shows; his restaurants in New York, Las Vegas and Singapore; and more than 10 cookbooks, including the most recent, Molto Batali.

What might be lesser known is that Batali, 51, grew up on the West Coast, had some of his first professional positions at San Francisco’s Clift Hotel and Santa Barbara’s Four Seasons Hotel, and has long been intimate with the Los Angeles food scene. He co-owns L.A.’s revered Osteria Mozza, Pizzeria Mozza and Mozza Scuolo di Pizza with Nancy Silverton and Joseph Bastianich, and he has yet more plans for Los Angeles, as you’ll read. —E.C. Gladstone

What are your first memories of Los Angeles?

I was working in 1985 for the Four Seasons hotels, at the Clift, and Lydia Shire opened the restaurant in the brand-new Four Seasons on Doheny Drive in ’86 or ’87, and I went down there because I was a big fan of hers. Then I moved to Santa Barbara, and from there, the fun weekend spot was Los Angeles—that was ’88 to ’89. I went back to Spago and all the different late-‘80s places. I think the craziest place I was in was Campanile. I remember thinking, “Wow, this is a very big-shot restaurant.”

What did you like about LA when you were visiting from Santa Barbara, and what do you like now?

I like the variations. I’m never a big club guy. I go to restaurants and like to do things outside. Last time, I did a thing for the L.A. County Museum of Art with a guy named Bobby Kodick [CEO of Activision Blizzard]. So we just hung out with Bobby at his house, made dinner, and then suddenly Mary J. Blige shows up and sings, and you say, “Wow, this is Los Angeles.” It’s a very, very intoxicating lifestyle.

An LA version of Eataly, your hugely successful Italian market in New York, has been rumored.

It’s definitely in the works. I think people are looking for a kind of gastronomic destination, kind of like Harrod’s [in London] or El Corte Inglés [in Madrid], places all over the world … where people could go and understand that, it’s not just one-stop shopping, but one-stop shopping for the best of what Italy has to offer.

You must appreciate the produce that you can get out here.

Oh, the farmers markets! You can get unbelievable strawberries at the beginning of March. It’s hard for us to get our heads around that [in New York].

When you’re in town from New York, where do you eat?

Well, if I’m [here] two days, I’ll go funky for one meal, I’ll go to Mozza for one meal, and I’ll go somewhere else that I like, where either I know someone or I’ve heard about, or I’m inspired by or want to know about. Last time I was in town, we had a meal at Animal and we had a meal at Street, and I love them both. They were spectacular. I love [Susan Feniger] and I love her food.

If someone’s visiting LA, where do you tell them to go?

I tell them they should go to the Getty Center, the La Brea Tar Pits, one Wolfgang Puck restaurant, and run up and down near the Pacific Coast Highway.

Where would you say you had your best meal in LA?

Outside of the restaurants I own, I had a legendary eight-course lunch with my cooks at Spago the week we were opening Mozza, and the same weekend I had Ludo [Lefebvre] cook me, at Bastide, an eight-course meal all paired with amazing wines. It was a 5,000-calorie weekend, and every [meal] worth it!