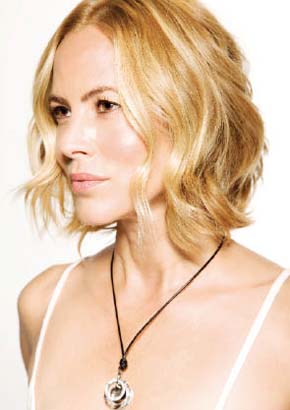 In addition to starring in acclaimed films and scooping up accolades, actress Maria Bello is also highly involved in philanthropic endeavors. It’s been a passion of hers from a young age, when Bello studied peace and justice education at Villanova University. “I was on my way to law school and decided to be an actor instead,” she says—which led to a successful career including a starring role on the TV series ER and Golden Globe-nominated turns in films such as The Cooler and A History of Violence plus her latest, The Company Men, in theaters on Dec. 10. Her latest philanthropic contribution is the Don’t Forget pendant, a collaboration with jeweler Judith Leiber that benefits Femmes en Démocratie in Haiti, a country close to Bello’s heart. (Bello wears the pendant in the photo above.) The actress lives in Venice with her son, Jack.

How did you first get involved with Haiti?
I’ve always felt very passionately about the importance of women’s rights in the world, and continued to do that work while I was acting. I went to Haiti 3 years ago, met Father Rick Frechette through Paul Haggis and we started Artists for Peace and Justice. I was blown away by what this man had done for the poorest of the poor, in a country that’s only an hour and a half off the shores of America, and I fell in love with the country. Also, I worked with Vital Voices in Washington, D.C., and their Haitian chapter is Femmes en Démocratie, a network of 300 businesswomen, politicians and artists. And I worked with these women and have helped them with their campaigns.

And then you collaborated with Judith Leiber on the Don’t Forget pendant. How will the proceeds impact Haitian women?
Judith Leiber really stepped up to get the women back on their feet and help them get elected. [The proceeds benefit] women that are running for parliament, congress and senate. So it will go toward their campaigns—and what I mean by campaigns is very simply a bullhorn and transportation to the different towns—and for helping to rebuild their businesses. A lot of these women had small businesses before the earthquake [on Jan. 12, 2010] and then they were damaged or destroyed. So by supporting the women, we’re supporting the children, and we’re supporting entire families and communities.

And 100 percent of the proceeds go to Haiti.
I can personally guarantee that every penny is going to be used by these extraordinary women who I’ve worked with for years. Oftentimes you give money and you don’t know exactly where it’s going, but I know that when you buy these, you get something beautiful and you’re also doing something great.

How do you spend your time when you’re in L.A.?
I live in Venice Beach, and we have a joke that when people live in Venice, we never go east of Lincoln Boulevard. My favorite restaurant is Gjelina on Abbot Kinney Boulevard. It’s a local hangout and [has] wonderful food and a great community vibe. I love First Fridays on Abbott Kinney. The first Friday of every month, the stores are open till 10 and there’s music and food trucks. I bring my 9-year-old son there. We often scooter over to Abbot Kinney for popsicles or go to Wabi-Sabi, a great sushi restaurant. Yeah, most of my weekends are spent on Abbot Kinney Boulevard! And the Whole Foods in Venice. I go twice a day.

The pendant will make a great holiday gift. What else will you be giving your friends and family?
There’s some jewelry that friends made in camps in Haiti that I have that I’m giving away as gifts. There’s a note from each woman who makes it. I like anything with a message, that inspires people. People are so much happier to get a gift like that than to, you know, get a scarf.