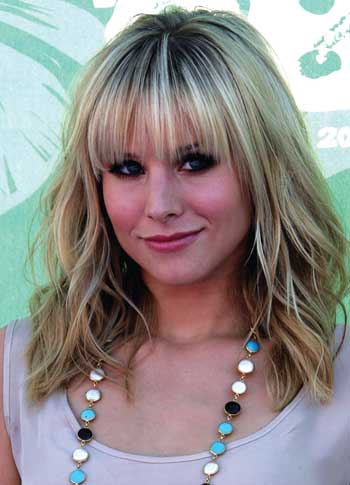 Effervescent and quick-witted, Kristen Bell is not unlike the smart ‘n’ sassy namesake character of Veronica Mars, the role that made her a household name. Trained as an opera singer, she’s since displayed considerable comedic chops as the vain yet sympathetic heartbreaker Sarah Marshall in Forgetting Sarah Marshall; she also played the mysterious Elle Bishop on Heroes (and continues to voice the omniscient title character of Gossip Girl).

This fall Bell, 29, stars in three new films: When in Rome with Josh Duhamel, Couples Retreat with Jason Bateman and Vince Vaughn, and the animated feature Astro Boy. She lives in the San Fernando Valley with her three dogs.

Question. Pre-Veronica Mars, you starred in A Little Night Music at Los Angeles Opera. What was that like?

Answer. That was really fun! The scary thing about that is, that was five years ago, so I was 24 or 25, and I was playing a 13-year-old. To me that’s scary, I don’t know about anyone else. But it was a wonderful cast—it was Victor Garber and a bunch of amazing people…. I’m definitely itching to jump back on stage. I miss the theater so much, and especially musical theater. I’m rehearsing this weekend for the reading of the Heathers musical.

A. It’s actually because of doing Reefer Madness. Andy Fickman, who directed it, and some of the other cast members from Los Angeles had convinced me to try it out in L.A., and I was so nervous to take that risk—you know, move to a strange place…. So they said, “We’ll be your family, we’ll take care of you,” and I lived on Kevin Murphy’s couch for four months—Kevin Murphy is the writer of Reefer Madness. So they kind of took care of me, and I just started auditioning and was very, very lucky.

Q. How do you like to spend a free weekend in L.A.?

A. Most of the stuff I like to do is outside, or go see a double feature. I love to hike because of the dogs. I love Fryman Canyon, which is a great hike. I also love Griffith Park because you can go up to the Observatory and eat lunch, and it’s a really nice afternoon. I like to keep somewhat of a pedestrian lifestyle, as difficult as it is.

Q. So you’re a karaoke lover. Where do you go to do that?

A. T here’s a bunch of places in Koreatown that are amazing. What I’m really excited about is my buddy [Veronica Mars costar] Ken Marino just built a karaoke room in his house. He calls it Nine Tight, because it fits eight comfortably. So I’m really excited to get over there and hop on the mic.

A. I do, I really like all the little boutiques on Ventura [Boulevard], especially Dari. Everything’s fantastic. There’s also one called Belle Gray.

Q. And where do you like to go out to eat?

A. My favorite restaurant is Firefly. You know what, it’s so cool. It’s got an inside area that looks like a library, an outside area that’s got these fire pits. The only weird thing about it is, it’s got these unisex bathrooms. So you know, keep your guard up, and watch for camera phones, that’s what I always say.

Q. You have a ton of films coming out. Couples Retreat has quite a cast.

A. Yeah, it’s about four couples that go on a retreat to reinvigorate their marriages. My husband is played by Jason Bateman, and through a PowerPoint presentation [we] tell our friends that we’re considering divorce … and there’s a therapy retreat that’s known to be the best therapy retreat in the world for couples, and we’re looking for an answer.

A. Absolutely, absolutely. You know, it really gets the point across.

Orange County Things to Do With Children

If you have kids and are in Orange County things to do are a cinch!  Ask any kid in the world where they want to go and you’ll hear the exact same universal response: Disneyland.  This is the one-stop, granddaddy amusement park of them all and still, hands-down the best place for an adult and child to have fun together.  If you’ve already been to the “happiest place on Earth,” maybe take a detour and visit Knott’s Berry Farm amusement park.  You’ll find 38 major rides at the park. Seven are extreme thrill rides, most of them on the Boardwalk.

Looking for things to do in San Diego this weekend? Check out Where LA’s Events Roundup. We give a detailed listing of the hippest and hottest things going on for the month, so it’s easy to plan a night out. You’ll find a complete selection of theater performances for a bit of culture. We’ve got a complete breakdown of happenings for Mardi Gras and St. Patty’s Day as well. Stay in the know and never miss out on another happening again. San Diego is known for its weather, but it’s also place where there’s always something going on. Keep up on the action with our events breakdown. Your social life will thank you later.