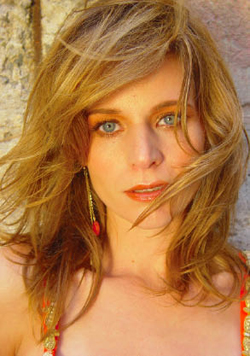 After graduating from McGill University in her native Montreal, Jessalyn Gilsig studied at Harvard’s prestigious American Repertory Theatre. Television, however, became the medium that would define her career—she’s worked on some of the most iconic shows of the last decade. One of Gilsig’s most memorable characters was the troubled Gina Russo on FX Networks’ acclaimed Nip/Tuck, and she enjoyed recurring roles on NBC’s hit shows Heroes and Friday Night Lights as well as CBS’s CSI: NY. As the conflicted Terri on FOX’s smash hit musical-comedy, Glee, Gilsig continues her hot streak. On the big screen, she worked with Robert Redford on The Horse Whisperer, and starred alongside Val Kilmer in the action/thriller XIII: The Conspiracy. A wife and mother, the versatile actor resides in L.A., a city she has come to love.

Why do you think Glee has become such a huge hit?
The show offered hope, and people could relate to the small triumphs of its characters—those occasional moments when you feel like everything is going just right. The diverse guest stars, who transcend generations, is also attractive. In addition to great stage actors like Debra Monk and Victor Garber, we’ve had people like Neil Patrick Harris. America knew him, but was not familiar with the depths of his talent.

Terri is not Glee’s most popular character.
I adore her, although I wouldn’t want to hang out with her. Terri is just like that mean girl in high school that is so insecure, but nobody knows it because she has great hair.

She is not the first unsympathetic character you’ve played.
Right. Gina in Nip/Tuck was another, also created by [Glee creator] Ryan Murphy, whose women tend to be more multifaceted. The lack of likability of these characters doesn’t bother me, as long as people are entertained by them.

So, Terri hasn’t sung yet…
She’s a bit of a loser in that regard. But I really want a number. Not singing on Glee would be like going to Rome and not seeing the Forum!

After living back East, how do you feel about Los Angeles?
It took a few years, but I have grown to really appreciate the city. I had to accept that it was not New York, but rather a series of interconnected villages.

What do you like to do when you’re not working?
Well, with a 4-year-old daughter, my priorities are different. This weekend we’re going to Griffith Park, and we’ll probably stop at The Trails Café. They have good waffles, avocado sandwiches and these incredible bittersweet chocolate scones. Other times, we’ll go hiking in Franklin Canyon or in Malibu, sometimes stopping at the Malibu Country Mart. We also go “shopping” in Chinatown, where my daughter and I each take a dollar bill to buy one another a little present.

How sweet! Where else do you hang out?
Growing up in Montreal, I’m attracted to little bistros like Café Stella, and enjoy the relaxed setting and good pizza at Delancey. I like the coffee at Figaro Bistrot on Vermont and Lamill in Silver Lake, which is close to two of my favorite shops. Yolk has unique gifts and adorable things for kids, and OK sells very special books on architecture, fashion and art.

You’re an accomplished artist.
I’ve always drawn, and my paintings actually appeared in the film The Station Agent [as the work of Patricia Clarkson’s character]. To kill time during shoots, I often find myself drawing in my trailer. The drawings are kind of like a diary of my acting career, which I’m now compiling into a book.