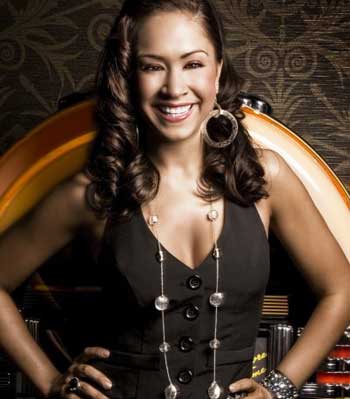 Diana DeGarmo is a Nashville native who spent the last year taking the world by storm in Dolly Parton’s National Tour of “9 to 5” playing the role made famous by Dolly herself. No stranger to Broadway, she has been the lead billing for numerous shows most recently as Sheila in Broadway’s revival of “Hair”.

Diana is currently playing Angelina, a mob bosses daughter on the hit soap “The Young and the Restless” and she can be seen as “Dora Hand” in the film “The First Ride of Wyatt Earp” to be released in early 2012. She still remains the youngest contestant to ever make the Top 2 in all 9 seasons of American Idol. America agrees that she was amazing then and her vocal abilities are even stronger now. She’s excited to be recording her first true country album. We sat down with Diana DeGarmo to talk about her new holiday show—Upright Cabaret’s A Broadway Christmas at the Catalina Jazz Club—former American Idol contestant Ace Young and what she wants for Christmas.

You became an overnight sensation on the 3rd Season of American Idol at as a teenager. What was that experience like at such a tender age? Do you think American Idol prepared you for life as a professional singer?

Being on Idol was quite the learning and growing experience for me. It helped me in more ways than one.  Being able to compete on a world class level when I was only 16 let me know that I was doing the right thing! Later, the experience allowed me to expand my horizons and try things other than singing, like acting on Broadway and in TV and Film.

Shortly after American Idol, you made your Broadway debut. What show was that and how did that experience differ from being on American Idol?

I made my Broadway debut in “Hairspray”, playing Penny! Getting the opportunity to perform on Broadway was yet another “one of a kind” experience for me.  Yes, it was different than being on American Idol, for the obvious reason that I had to act.  My singing got me the audition, my acting ability booked the job!

What is your favorite character that you played on Broadway?

Picking a favorite character is like a mother picking which child she likes best! I’m a Gemini with more than two personalities so you could say, I’ve had a lot of fun living each of my character’s lives!

Currently, fans can see you play a mobsters daughter on Television in the Soap Opera “Young and the Restless.” What is it like working in television?

Working in Daytime TV has been a much smoother transition then I had originally thought. The most similar thing between TV and Theater is the amount of people behind and in front of the scenes. It takes even more than a village to put on both of them!

On Tues, Dec 20, you will host and perform in Upright Cabaret’s “A Broadway Christmas.” How do you feel about that?

What do you love about spreading the joy of the season with other great performers and the audience?

The holiday season is about sharing and helping one another.  I am excited for everyone to share their talents and help spread happiness to kick off the season!

Why is this a “not-to-be-missed” kinda show?

Live shows are always a “not-to-be-missed” kind of event because you never know what’s going to happen especially with so many talented performers under one roof! Ace and I are going to sing a new Christmas song that we wrote together.  It is called “Christmas Is” and it’s one of a kind… if you aren’t there, you will regret it!