A Chick’s Guide to Beer in Los Angeles 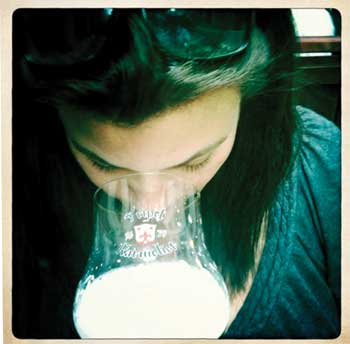 If Los Angeles had a spokesperson for beer, it would have to be Christina Perozzi. As the “Beer Chick,” the ebullient beer sommelier has crafted beer lists for some of L.A.’s best eateries and bars. Perozzi now shares her girl-power-esque nickname with fellow expert Hallie Beaune, her co-author of the book The Naked Pint: An Unadulterated Guide to Craft Beer and her co-owner in 8th Street Bottle Shop, a bottled-craft-beer shop in the Golden Gopher downtown. Where tapped Perozzi for her insight into the local beer scene and tasting tips.

You came to L.A. to be a musician. When did you decide to focus on beer?

It was the moment when I realized that I had a passion for craft beer as big as my passion for music. It was when I realized that, in addition to being delicious, beer was history, cultural anthropology and travel all rolled into one. Also, beer doesn’t reject you the way the music industry does! Oh, and also, I heard Patty Griffin’s new record and said forget it.

What’s it like to be in the male-dominated beer world?

It’s fun! I seem to find myself in a lot of situations where I’m the only girl in the room, which ain’t so bad. In the not-so-distant past, I used to get a lot of wide-eyed “you’re a girl and you’re a beer expert?” questions, but not so much anymore.

How do you think L.A.’s craft-beer scene has evolved?

We used to be about 10 years behind the East Coast and places like Portland [Oregon] and Seattle and even San Diego in terms of beer culture, but now we’re on the cutting edge. L.A. brewers are innovative and experimental. They’re what I call “third wave,” meaning brewers are creating nuanced, interesting beers that don’t necessarily smack you across the face with hops like you get in a lot of other West Coast brewing communities—not that there’s anything wrong with that. For instance, Mark Jilg from Craftsman Brewing Company in Pasadena, who basically started the craft-beer revolution in L.A., makes a delicious beer called Tripel White Sage that’s brewed with white sage from the California hills.  Patrick Rue at The Bruery in Orange County makes a fall seasonal called Autumn Maple made with yams and maple syrup.

What have been some of your favorite local projects?

They’ve all been really great and really different. I loved working with Will Shamlian on Laurel Tavern in the Valley. His goal was to only do California beers, only on tap and serve them all at a great value, which is what I think beer is all about. Beer Belly was a great recent experience. Owners Jimmy and Yume Han really know their stuff and decided to concentrate not only on California beers, but on specifically Los Angeles-area beers! … And, of course, I love working with the Golden Gopher and Seven Grand with Hallie in downtown Los Angeles.

What are some of your other favorite spots for brews?

The Daily Pint in Santa Monica—aside from having one of the best beer lists and having four hand-pumped beer engines for special cask-conditioned pours, this bar has one of the most amazing single-malt scotch collections in the city. The Library Alehouse in Venice—the beer list is top-shelf, and they do some of the most amazing beer events in L.A., and [do them] often! The Surly Goat in West Hollywood—the owner, Ryan Sweeney, is one of the foremost experts on beer in Los Angeles. He also has the best connections and the best backroom collection. If you’re real nice to him and show a real interest in beer, he might break out something special for you. The Tripel in Playa del Rey—I love this teeny-weeny place close to the beach! They have great and interesting food, an encompassing beer list and they make beer cocktails!

What advice would you give to a novice beer drinker?

Don’t judge a beer by its name, its color, its label, whether the commercial is funny or if your dad likes it. Focus on flavor and forget all the rest. Pay attention to the beer that you’re drinking. Savor it, treat it like wine. Be adventurous in your choices, and don’t define yourself by one brand or style. Take notes, read blogs and books like ours, The Naked Pint, or Tasting Beer by Randy Mosher or The Brewmaster’s Table by Garrett Oliver. And, most importantly, drink lots of beer.

Be honest: Do you ever get tired of drinking it?

There are days, I must admit, when a good Wild Turkey Rye Manhattan from Seven Grand or a mezcal cocktail from Las Perlas downtown definitely wins out. But my first and last drink is usually a beer!