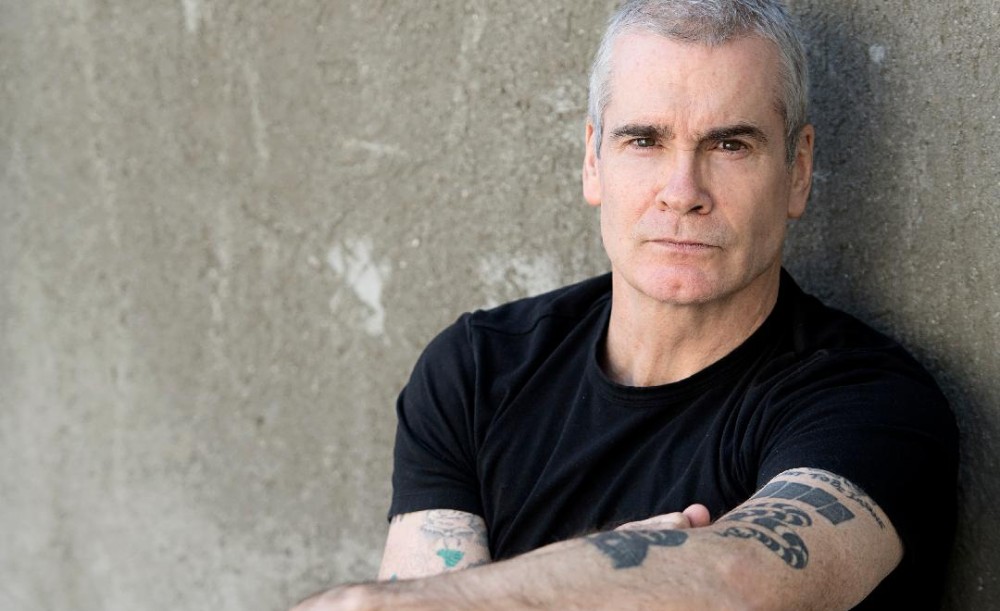 The punk-rock icon, author, actor, traveler and raconteur has a few (million) things to say, so listen up, pal.

Professional badass Henry Rollins, the famously intense ex-vocalist from Black Flag and the Henry Rollins Band, is a workaholic with a pile of post-Sons of Anarchy projects. There’s his Henry & Heidi podcast, KCRW DJ sets, a TV role in Deadly Class and new books: Stay Fanatic! and a second photo memoir. Next? The film Dreamland with Juliette Lewis. “I play a capably violent bad guy,” says the capably violent good guy, reflecting on his 20-plus movies. “I get that a lot.”

Rollins just wrapped his 109-city world tour of Travel Slideshow, a stage monologue about Iraq, Afghanistan, North Korea and beyond. Comedy Dynamics focused on the tour’s laughs for Rollins’ Keep Talking, Pal.—a TED Talk-style TV special and DVD. “I don’t consider myself an artist,” he says.“I just say ‘yes’ to things. … I am what I’ve always been: a jackass of all tirades.”

What are L.A.’s best venues for live music?

I love The Echo and The Echoplex because the bands that play there are in my wheelhouse. Bands like the Oh Sees—young, prolific, noisy, brilliant bands that America and L.A. have a lot of these days. I often go to Zebulon, a relatively new venue with super eclectic music. I love Teragram Ballroom—which is “Margaret” spelled backwards—to see people like Ty Segall, and the Troubadour and the Whisky because they’re legendary and I’ve been going there since I was 20.

You’ve always been fanatical about collecting vinyl and books. How many albums do you own now?

Oh, wow. Thousands and thousands. I have a three-car-garage full. I used to walk twice a week, 60 minutes each way, to Tower Records on Sunset. Now, I go to Amoeba [Music] all the time. I go in with an agenda, put the vinyl into my Johnny Ramone record bag and cash out. I love Amoeba. When I did concert tours I was perpetually broke, but with what money I had I would buy records and books. America used to be dotted with record and book stores that were small but well-curated. When I walk into The Iliad on Cahuenga, it reminds me of those bookstores where I would buy first-edition Henry Miller books for $5, and $7 books that were signed but they didn’t know it. Real treasures. I’m also a fan of Book Soup. If you’re going to have such a small space, you’d better love books and know what you’re doing. It’s a cool hangout.

You’ve also amassed a world-class collection of punk-rock posters and original art. Which galleries and museums are you drawn to?

I live in a three-story building with walls covered with framed, archival punk posters, artwork, some paintings. Shepard Fairey’s a pal of mine and designs my tour posters, so we get into cahoots once in a while at his gallery, Subliminal Projects. He has lots of public events there, and it’s always cool. Whenever The Broad, LACMA or MOCA calls me to DJ or interview artists, I always say ‘yes’ to art. I especially love the Broad because it’s free, because it’s so culturally exciting, because of the big-ass art collection and because of the architecture. … It takes advantage of the sun so, at different times of day, there’s this ambient lighting effect. Maybe I’m being too poetic, but there’s something about the Broad that borders on magical.

You’ve lived the majority of your life in Los Angeles and are a local legend. What’s your nitty-gritty take on L.A.?

I grew old in this city. I came here as a 20-year-old to join a punk band, and now I’m 57. I have a history in Los Angeles, and it’s inescapable. You know those old Grave Line Tours where you’d ride in a hearse to hear tragic stories? That’s kind of my view of L.A. When I return to some of my favorite places, it’s the same place but a different building. There’s a Trader Joe’s on Santa Monica where the first Black Flag record was recorded in 1981. The frozen food section is where the studio was, and I slept upstairs on the floor using my sneakers as a pillow. Same place, but the building is gone. Sometimes I go to Fatburger where the original Oki Dogs used to be, and I trip on that. I’m powerless against the burger, so I’ll get my food and sit approximately where I sat when it was an outdoor hangout and remember when, just 4 feet away, I watched John Macias of Circle One get in the face of an LAPD cop and make him back down. John was terrifying, and the cop didn’t want any of it. There are a lot of dead people in my rearview. A lot of my memories of L.A. have a tragic component.

Good things, too. I hate to be sentimental, but for years I lived at the beach in Redondo when I was in Black Flag, and the smell of the ocean has never worn off for me. I would go to the beach all the time for the thrill of it—it gave me joy. I would stare at the ocean for hours, thinking my stupid young-man thoughts. There’s no ocean smell in Hollywood where I live now, so right around sundown I miss it, like a stab in the chest, and can’t breathe… Now, I’m not the most emotional person. Hyper and prone to yelling, yes—not Mr. Emo. But the sea air makes the power lines buzz, and suddenly I’m 22 again. At once I feel old yet ageless, and it moves me almost to the point of tears.