66°F
You are at:Home»Blog»45+ Top Los Angeles Things to do in October 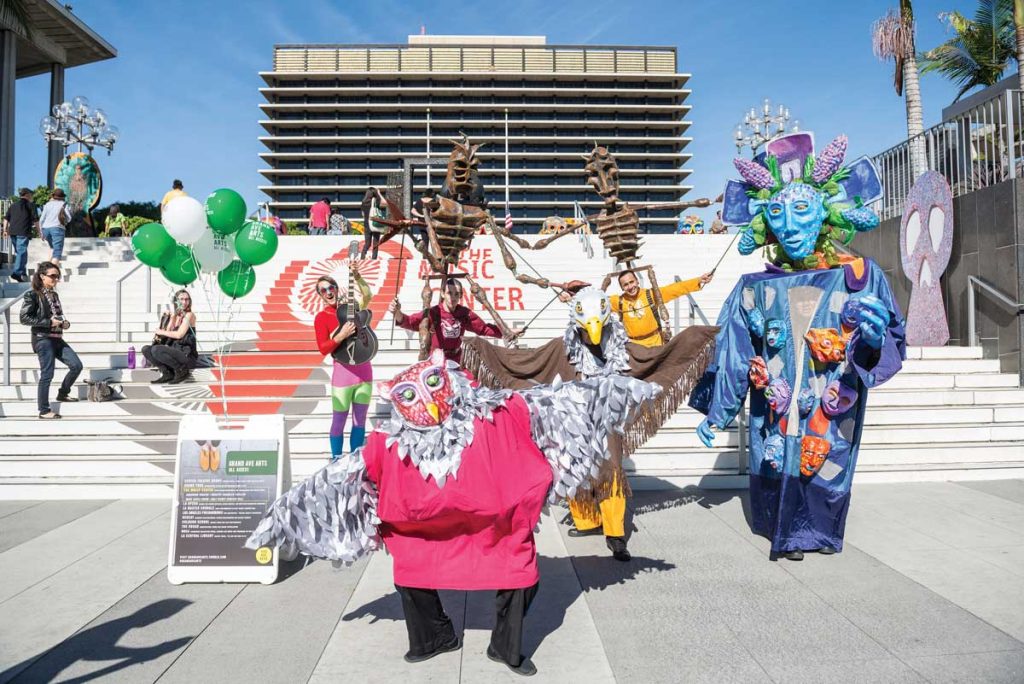 From Halloween Frights and festivals galore—find the best Los Angeles things to do in October.

DTLA Oyster Festival
Oct. 1-2. The Oyster Gourmet will again convene oyster farmers from around the country for the second annual DTLA Oyster Festival at Grand Central Market. Meet the farmers, taste their half-shells and learn about the distinctive “merroir,” or taste of place, that distinguishes oysters grown in different waters. Sucking goes from 11 a.m.-8 p.m. both days. 317 S Broadway, downtown. More Info.

Los Angeles Haunted Hayride
Oct. 1-31. The popular Los Angeles Haunted Hayride, running all month, finds groups of scare-seekers piling into the back of a tractor to be paraded through Griffith Park’s Old Zoo. During this year’s Secret Society-themed event, riders are herded off the wagon to face part of the course on foot for the first time—with ghosts of hayrides past haunting their every step—to complete their initiation into an “elite” or “deranged” society. The Dark Maze and haunted village complete the experience. 4730 Crystal Springs Ave., Griffith Park, L.A., 310.993.8289. losangeleshauntedhayride.com

Queen Mary’s Dark Harbor
Sept. 29-Oct. 31. During the Queen Mary’s Dark Harbor—taking place all month—Long Beach’s ocean liner/hotel draws from its history, crafting modern-day scares out of the vessel’s haunted past. This year, the ship’s protector, the Iron Master, takes center stage with his new maze, Intrepid. Also on board are five more signature mazes, more than 200 monsters and a variety of spirited attractions. 1126 Queens Hwy., Long Beach, 877.342.0738. queenmary.com

Pop for the People: Roy Lichtenstein in L.A.
Oct. 7-March 12. Renowned for his representations of everyday objects and his inventive interplay of line, dot and color, Roy Lichtenstein (1923–97) shaped the Pop Art movement. The Skirball Cultural Center’s new exhibition explores how the artist and the movement, buoyed by a renaissance in printmaking, made fine art accessible to the American public in ways that had not been achieved before. By exploring the historical and cultural context of Lichtenstein’s life and work, the exhibition sheds light on the social impact of Pop Art. The show coincides with the 50th anniversary of prominent Los Angeles printing house Gemini G.E.L. and features more than 20 of its Lichtenstein prints. 2701 N. Sepulveda Blvd., L.A., 310.440.4500. skirball.org

Festival of Disruption
Oct. 8-9. Curated by David Lynch, this fest at the Theatre at Ace Hotel features the likes of Robert Plant and Frank Gehry. 929 S. Broadway, downtown, 213.235.9614. festivalofdisruption.com

Overtime Power Hour
From Oct. 14. Head to Nest at WP24 at The Ritz-Carlton, Los Angeles for specially-priced drinks and dishes available after every Kings, Clippers and Lakers home game at the Staples Center until close. Overtime Power Hour kicks off on Oct. 14—the LA Kings’ first home game of the season. Small bites start at $6 and include signature items such as the Maine lobster spring rolls with prawns, ginger and 10 spice honey; baby pork belly “bao buns” with Chinese honey-garlic glaze; and sushi; along with a special selection of off-menu items available only during the power hour. Classic and Far East-inspired cocktails start at $9 and include selections like the lychee martini made with Ultimat Vodka, lychee, and lime; also find house-made Sangria with red wine, prosecco and fresh fruit. 900 W Olympic Blvd., downtown, 213.743.8824. ritzcarlton.com

The Science Behind Pixar
Oct. 15. The California Science Center has always had a knack for making learning fun. Now the museum is merging science with popular animated films in what’s sure to be a winning combination. The Science Behind Pixar Exhibition has its West Coast premiere, providing an interactive look at the computer-animation giant’s movie-making magic. Visitors can explore the science, technology, engineering and math concepts behind the Pixar process through hands-on activities and learn how artists and computer scientists bring the company’s award-winning films to life. Full-size re-creations of beloved characters like Buzz Lightyear, Dory, WALL-E and Monster Inc.’s Mike and Sulley let little ones feel like a part of Pixar’s animated world. $9.95-$14.95, under 4 free. 700 Exposition Park Dr., downtown. californiasciencecenter.org

The Ease of Fiction
Oct. 19. The Ease of Fiction subverts the status quo, and Genevieve Gaignard explores femininity and race at the California African American Museum. 600 State Dr., downtown, 213.744.7432. caamuseum.org

Celebrate Forsythe
Oct. 21-23. The Music Center kicks off its dance season with Celebrate Forsythe at the Dorothy Chandler Pavilion. The monthlong series of performances and events in celebration of multimedia dance artist and choreographer William Forsythe. 135 N. Grand Ave. musiccenter.org

Day of the Dead in Grand Park
Oct. 29-Nov. 5. Downtown’s Grand Park is a popular spot for civic gatherings and casual strolls. But in late October, the park (with partner Self Help Graphics & Art) will celebrate Día de los Muertos, or Day of the Dead, by filling its open space with more than 50 altars and art installations that honor lost loved ones and express community struggles with education, gang violence and immigration reform. The altars’ unveiling happens at the Noche de Ofrenda ceremony on Oct. 29 from 7-9 p.m., and they are on view through Nov. 5. Visitors can also learn about the holiday’s traditions and artwork during free lunchtime tours. 200 N. Grand Ave., downtown. grandparkla.org/downtowndia

Butterfly Pavilion
Through Oct. 16. See more than 25 North American butterfly species and an array of plants in this outdoor exhibit at the Natural History Museum. The Butterfly Pavilion showcases monarchs, queens, malachites and various longwings and swallowtails, which will flutter among flowering plants inside the enclosed habitat. The pavilion is just part of the museum’s nature-oriented attractions, which also include the outdoor nature gardens and indoor nature lab where you have on-site opportunities to learn about insects and other species in the urban environment. 900 Exposition Blvd., downtown, 213.763.3466. nhm.org

London Calling: Bacon, Freud, Kosoff, Andrews, Auerbach, and Kitaj
Through Nov. 13. While most of the art at the Getty Museum is concerned with the rendition of the human figure and landscape up to 1900, their latest exhibition focuses on innovative figure works from a prominent group of London-based artists who worked from the ‘40s through the ’80s, rejecting abstraction and conceptualism. This is the first extensive U.S. exhibition—80 major works—to explore the paintings and drawings of the leaders of the “School of London” movement: Francis Bacon, Lucian Freud, Leon Kossoff, Michael Andrews, Frank Auerbach and R.B. Kitaj. 1200 Getty Center Drive, L.A., 310.440.7300. getty.edu

Throw Me on the Burnpile and Light Me Up
Through Oct. 2. Lucy Alibar, the Oscar-nominated screenwriter behind Beasts of the Southern Wild, spins yarns about a unique childhood that included a run-in with a lecherous goat and Pentecostals on the radio in this play, having its official world premiere here. Kirk Douglas Theatre, 9820 Washington Blvd., Culver City, 213.628.2772. centertheatregroup.org

For The Record: Scorsese–American Crime Requiem
Through Oct. 16. Subtitled American Crime Requiem, this production explores over 40 years of the legendary Martin Scorsese’s storytelling by bringing his films’ soundtracks (including Goodfellas, The Departed, The Wolf of Wall Street) to life. Stop by before the show for Scorsese-inspired cocktails from the newly opened The Bar @ The Wallis, dine on handmade pasta and desserts from the Prince of Venice food truck and enjoy pre- and post-show entertainment and performers. Wallis Annenberg Center for the Performing Arts, 9390 N. Santa Monica Blvd., Beverly Hills, 310.746.4000. thewallis.org

A View from the Bridge
Through Oct. 16. Fresh off recent Tony wins and sold-out runs on Broadway and the West End, this production of Arthur Miller’s play follows a Brooklyn longshoreman obsessed with his 17-year-old niece and his raging jealousy over her love of an immigrant. For a more intimate experience, opt for onstage seating. Ahmanson Theatre, 135 N. Grand Ave., downtown, 213.628.2772. centertheatregroup.org

—with contributions from Gillian Glover and Suzanne Ennis.