66°F
You are at:Home»Blog»Celebrating Three Unsung Decades of Classic L.A. 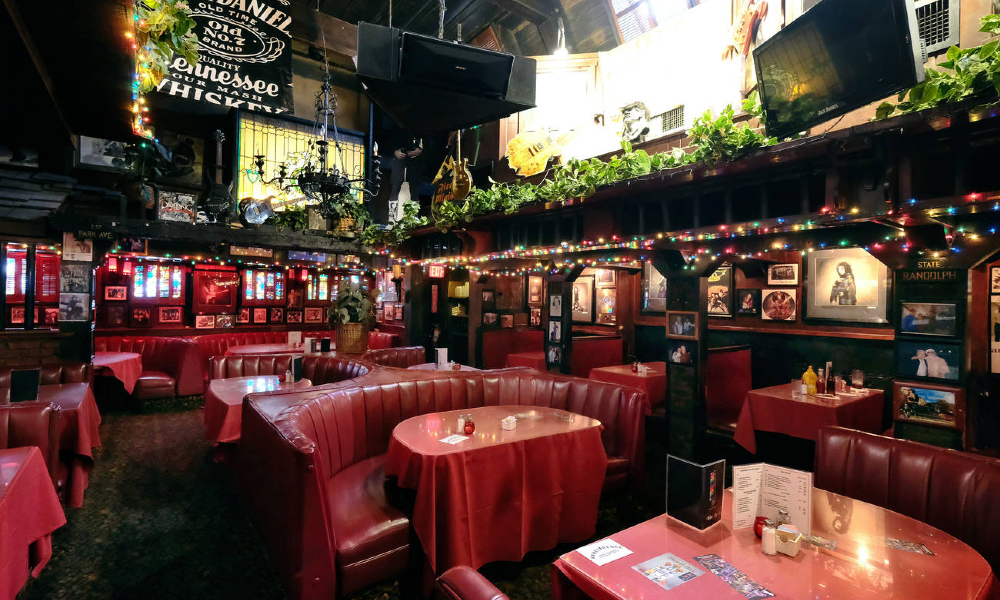 Usually the phrase “classic L.A.” brings to mind essential landmarks like Hollywood’s Musso & Frank Grill, which has served filmdom’s finest for a century, or the sort of iconic architecture the city’s know for, such as Googie coffee shops and Case Study Houses. Los Angeles is so closely associated with these two eras—the golden age of Hollywood and the midcentury  that there’s a tendency to overlook places that came later. Yet the structures and institutions built in perhaps less fashionable times similarly shaped the city into the dynamic and unique metropolis it is today. We’ve decided to pay tribute to some lesser-praised decades—the 1970s, ’80s and ’90s—and the culture-shifting spaces created in Los Angeles then, including revolutionary restaurants and cutting-edge cultural attractions. These places left a legacy that continues in the city today; they may not be that old, but they are classics. 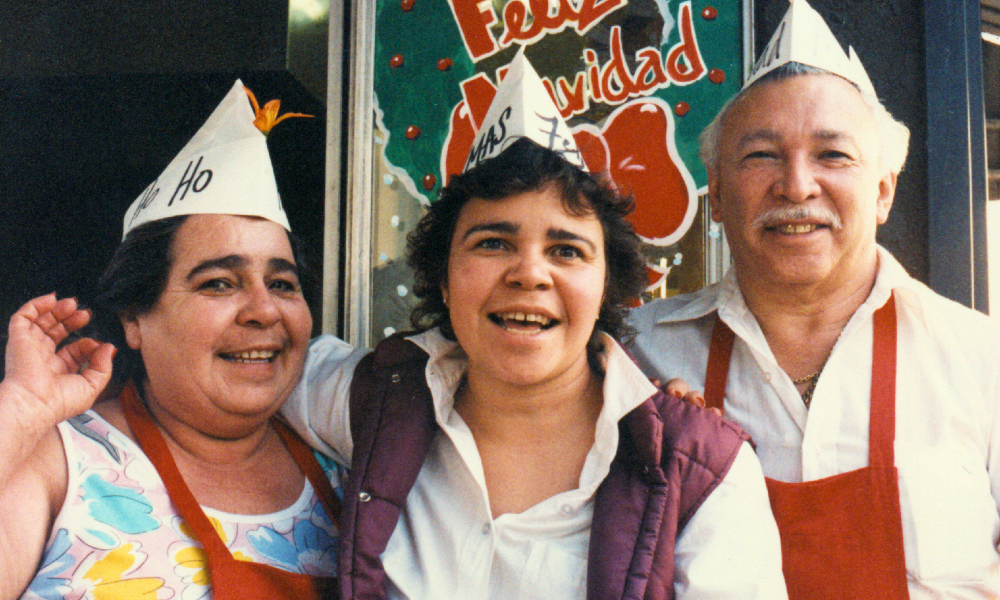 In the turmoil that followed the swinging ’60s, Los Angeles continued to be an epicenter of the nation’s “youthquake,” with its rebellious citizens fostering the rise of drug culture, the sexual revolution and social unrest. To get into the spirit, take a trip to the Sunset Strip, the still-popular hub of nightlife that played a huge role in music history. Most of the famous rock clubs were already well-established— Blondie opened for Tom Petty at the Whisky a Go Go in 1977. The place for rockers to go before, after or maybe instead of a show was the Rainbow Bar & Grill, established in 1972, which feels pretty unchanged since then. Pay tribute to comedy legends at The Comedy Store, founded in 1972 by Sammy and Mitzi Shore. The hottest comedy club of the era, it saw Richard Pryor and Robin Williams test out new material on its stage. Since then, generations of great stand-up comedians have come through its doors.

While the Source, the legendary health food restaurant mocked in Annie Hall, is sadly gone from the Strip, drive west and arrive at the still-soulful Inn of the Seventh Ray for good vibes and organic food. Founded in 1973, this Topanga Canyon treasure has a magical, creekside setting, a bookstore and meals that might transport to higher planes. If your idea of nirvana involves a plate of tacos instead, Yuca’s, a small hut established in Los Feliz in 1976, is the path to get there. 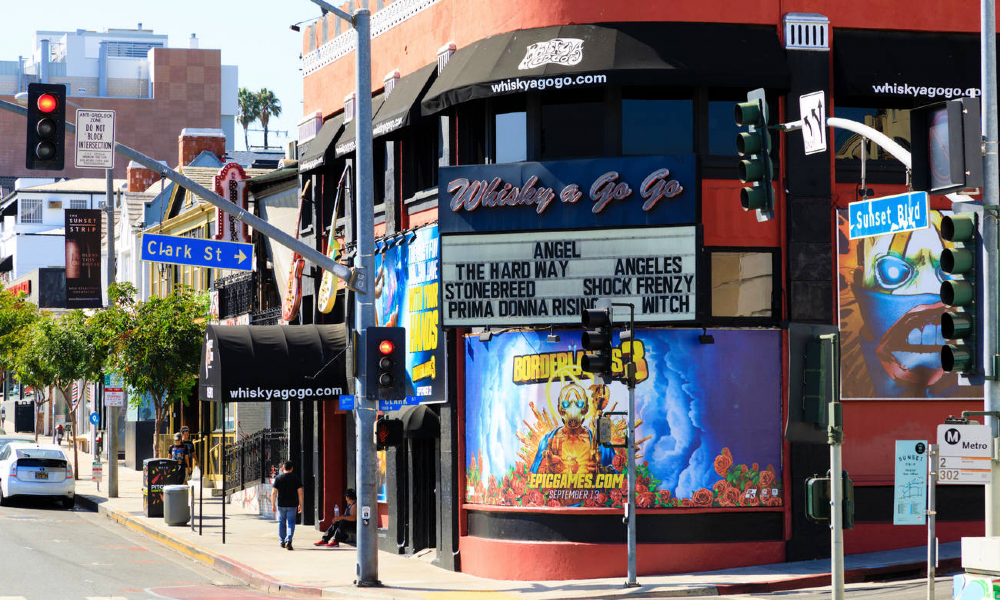 The Whisky a Go Go

With a half-century behind them, we can now start to appreciate some of the great buildings constructed in the ’70s. The Los Angeles Conservancy is hosting “The ’70s Turn 50: Celebrating the Decade that Broke the Mold,” commemorating that decade’s lasting imprint on the city’s built environment. The yearlong series of events will take place in some of the most important buildings from the ’70s, including the innovative ArtCenter College of Design in Pasadena, designed by Craig Ellwood, and downtown’s stunning (and shiny) Westin Bonaventure Hotel. From the outside, this “atrium hotel” looks like a mirrored rocket ship; inside, architect John Portman created massive concrete forms that reach seven stories high. Take one of the dramatic elevators to the BonaVista Lounge on the 34th floor to enjoy a cocktail and the view, which, yes, is revolving.

About to have new life is the 1977 George C. Page Museum, part of the 13-acre La Brea Tar Pits complex, a geological site that is an important depository of ice age fossils. For years, field-tripping LAUSD students have played on the Page’s grass-covered sloping walls on their way to see replicas of wooly mammoths stuck in the bubbling tar nearby. A new plan to integrate the museum into the surrounding park—and its active dig sites—is underway.

»EAT
JoanWhile it wasn’t around then, Griffith Park café the Trails serves an avocado sandwich that tastes wholesome and hippy. 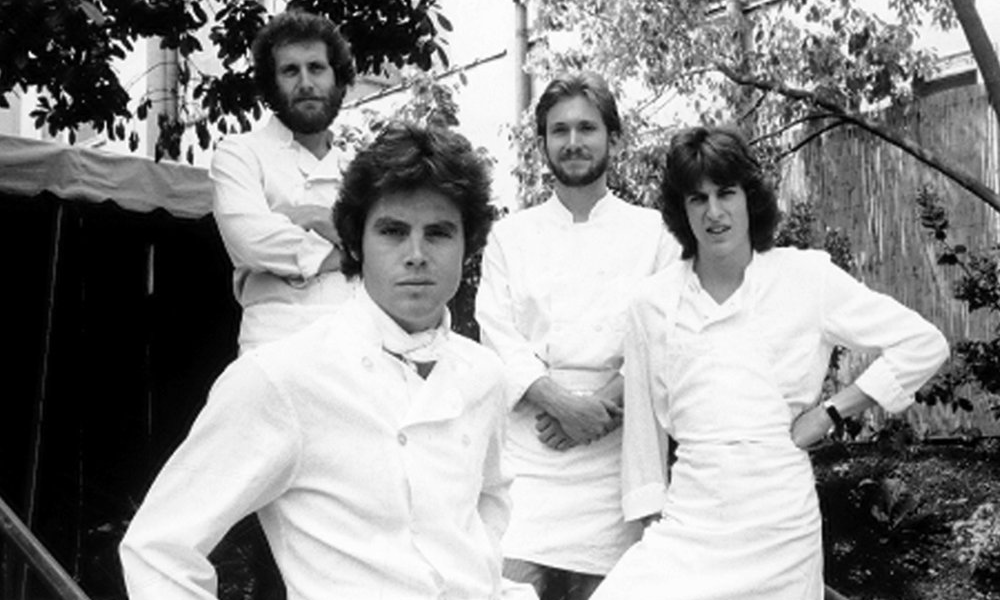 L.A. in the 1980s, for better or for worse, is associated with one, totally gnarly thing: Valley girls. And with Valley girls, of course, come shopping malls. Two of the finest constructed during the decade are the massive Beverly Center and the Sherman Oaks Galleria, which served as the location for the films Fast Times at Ridgemont High and Valley Girl.

Malls weren’t the only place to hang— World on Wheels, a midtown roller skating rink opened in 1981, was the hottest club in town for teens. Many pioneering hip-hop acts got their start playing here, and it was late rapper Nipsey Hussle whose investment group helped to reopen the venue in 2017.

For the older crowd, the city had a host of new restaurants, offering up the latest in culinary trends, be it the burgeoning California cuisine movement at Michael’s or the boom in Thai restaurants. Opened in 1983 by chef Prakas Yenbamroong and his mother, Talesai had three popular locations. Today, Yenbamroong’s son, Kris, runs the popular Night + Market restaurants, making a three-generation-long legacy. Also during the ’80s, the rise of the celebrity chef began, making Wolfgang Puck’s Spago and Nobu Matsuhisa’s Matsuhisa tough tables to get unless your agent made the reservation. Today, you don’t have to work for CAA to get a seat. 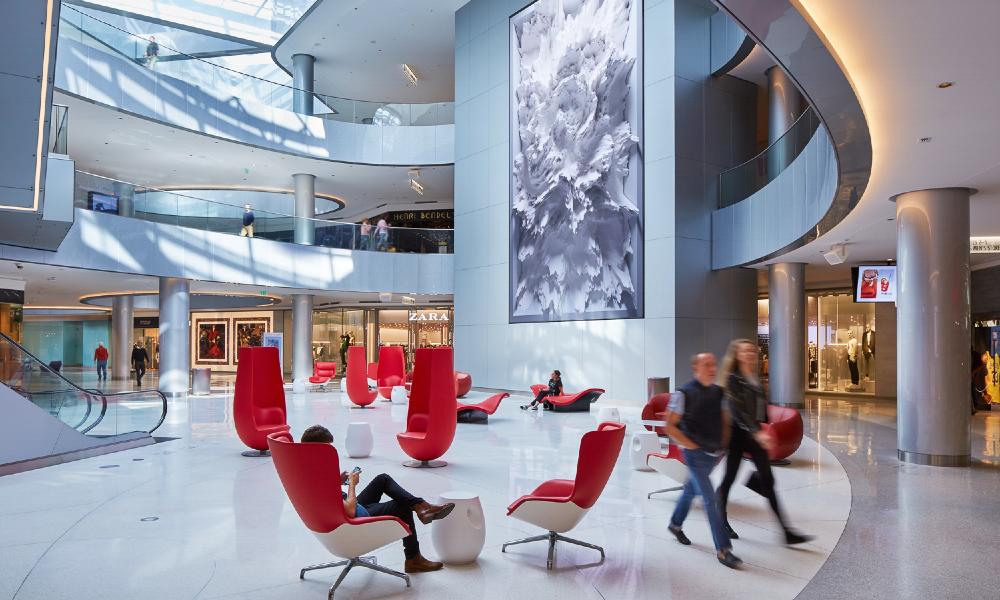 Culturally, the 1984 Summer Olympic Games did much to gussy up the city because, rather than build any new structures, the committee decided to upgrade existing ones, including a $1 million redo of Pershing Square and major improvements to Exposition Park, where the Los Angeles Memorial Coliseum and other facilities were used. Simultaneous to the games, the 44,000-square-foot California African American Museum opened in Exposition Park as the first African American museum of art, history and culture supported by the state. Designed by architects Jack Haywood and Vince Proby, CAAM continues its innovative programming and exhibitions in this vibrant space today.

Two years later, in 1986, the Museum of Contemporary Art moved into its new downtown digs—a postmodern work by Japanese architect Arata Isozaki—and any doubt that Los Angeles had become the art center of the country was over. 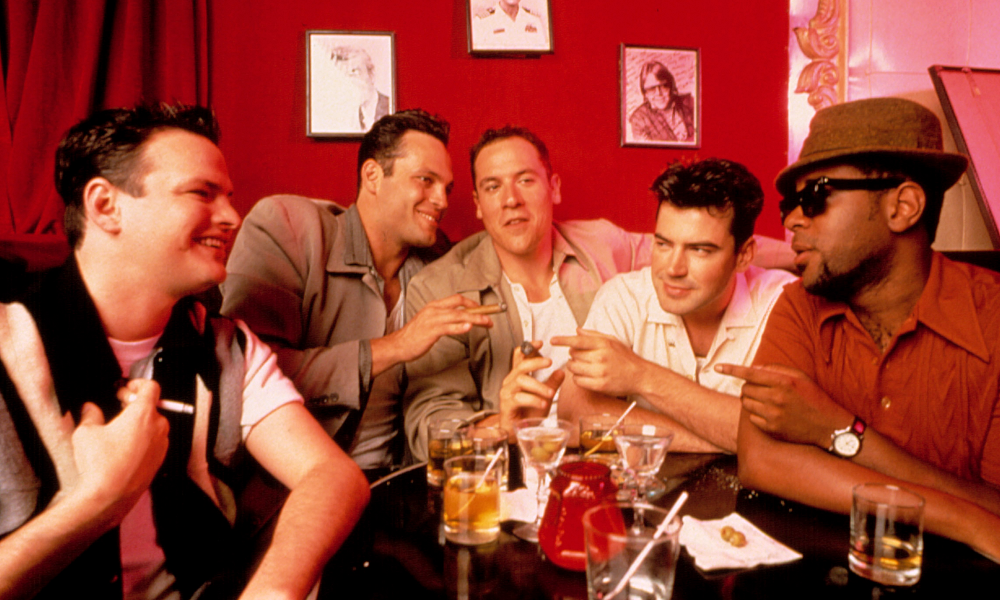 The cast of 1996’s Swingers at the Dresden Room

Dr. Martens aren’t the only thing from the ’90s that has resurfaced—in many ways, the ’90s never stopped in L.A., especially when it comes to fashion (leggings, oversized sweaters, high-waisted denim)—we were money then, we’re money today. Of course, the 1996 film Swingers brought a lot of iconic L.A. restaurants and bars back into the limelight, especially The Dresden Room, a sleek, midcentury restaurant whose lounge continues to feature the dynamic duo Marty and Elayne. Similarly, the enormously popular ’90s TV show Beverly Hills, 90210 brought the 1947 diner The Apple Pan into prominence as the onscreen Peach Pit restaurant. And a new, modern classic emerged, making mole the star of the culinary show: Guelaguetza, the family-run Oaxacan restaurant opened in Koreatown in 1994. 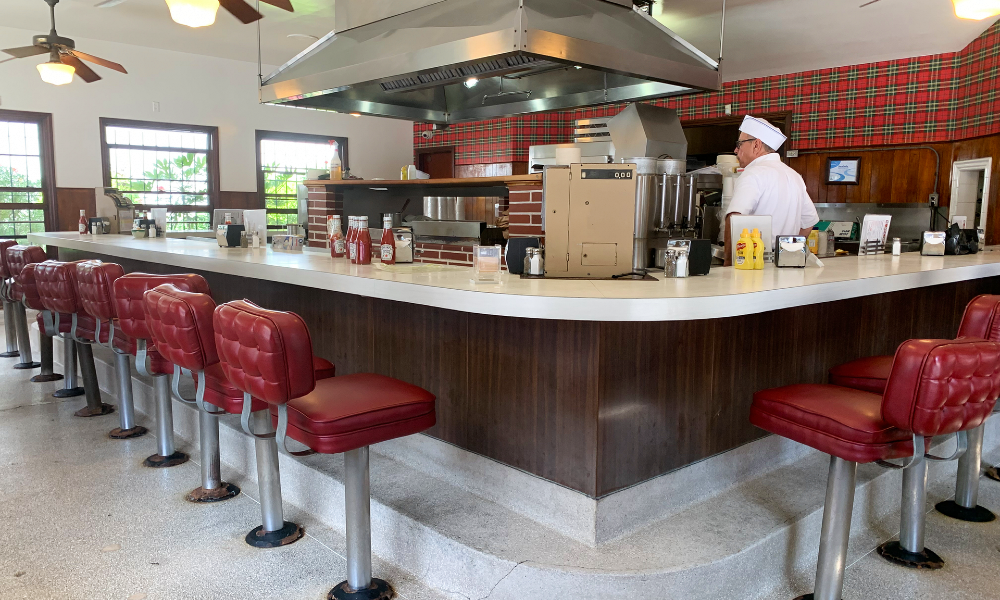 At 73 stories high, the U.S. Bank Tower, then known as the “Library Tower,” was the tallest building in L.A.; today, it’s the second tallest, and you can ride down a transparent slide from the 70th to the 69th floor—or just opt for the view from the nearby restaurant, 71Above. The Staples Center, which broke ground in 1998 and opened the next year, brought both of L.A.’s professional basketball teams together under one really big roof, uniting the city not by cheering the same team, but by giving us a choice.