There is a quintessential L.A. vibe to the local dining scene, but it draws inspiration from around the globe.

The case for Los Angeles being the most culturally diverse metropolis, eclipsing New York or Miami, is compelling, given its location on the threshold of Latin America and its status as a gateway to the Pacific Rim. With the largest Armenian, Korean and Filipino populations in the U.S. and a hundred other significant ethnic communities, the personality of Greater L.A. is shaped by the entire planet. So is the city’s cuisine, and the restaurants presented herein offer a trip around the world without driving to the airport.

Chef Dave Beran, formerly of Chicago’s Michelin three-star Alinea, scored a Michelin star of his own at his first SoCal restaurant, Dialogue, and has followed it up with the much-anticipated Pasjoli. Inspired by Parisian markets, the cuisine is a refined take on bistro fare—think turbot meunière and the classic dish of pressed duck—all presented with a sense of French artistry. Finales include soufflé or tarte au citron. Sophisticated but not stuffy, the open-kitchen dining room represents a new French Revolution in L.A. 2732 Main St., Santa Monica, 424.330.0020

Only in L.A. can restaurants housed in shopping malls be among the best in the city, and Osteria Cal Mare—a handsome aqua-accented dining establishment from chefs Michael Mina and Adam Sobel in the newly renovated Beverly Center—attracts serious diners. As the name implies, Cal Mare applies a uniquely Cal-Italian perspective to the bounty of the sea, and even fresh burrata can be topped with caviar. Lobster bucatini is enlivened with Calabrian chile, while squid-ink tagliatelle arrives with mussels and saffron crema. As one might expect from prolific celebrity chef Mina, the wine list here is excellent, showcasing every corner of Italy and beyond. 6602 Melrose Ave., L.A., 323.297.0100

Chef Teresa Montaño is inspired by her love of Valencia, the birthplace of paella, and she brings that passion to her Highland Park restaurant, Otoño. Sit at the bar beneath a graffiti mural by Valencia street artists PichiAvo, or huddle at a cozy table to enjoy tapas like croquetas de jamón, melt-in-your-mouth hand-cut jamón ibérico or refreshing chilled almond soup. The paellas have a bit of socarrat (the crispy rice at the bottom of the pan that screams authenticity), and the squid-ink-blackened version with scallops, chorizo and lemon cream is particularly memorable. Wash it down with wines from Rioja, Mallorca or the Canary Islands, then finish with crema catalana. 5715 N. Figueroa St., L.A., 323.474.6624 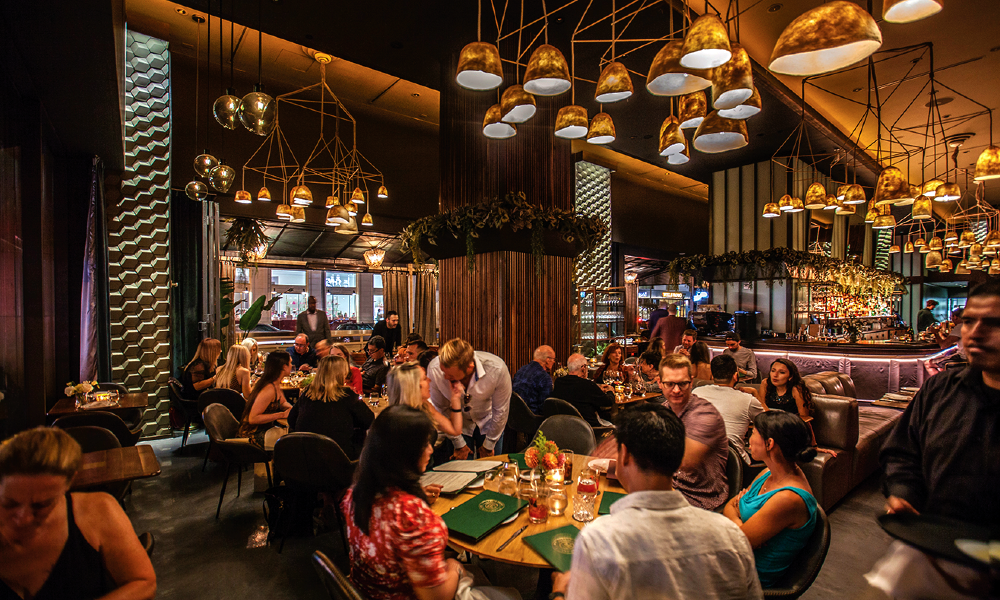 Mediterranean-spirited Le Grand is one of the best-looking restaurants in downtown L.A., an indoor-outdoor setting where a laid-back attitude is infused with a healthy splash of glamour. Alex and Chris Manos (executive chef and chef de cuisine, respectively) are Athens natives who love celebrating Greek culinary traditions, but their fine-dining experience results in innovative touches and artful presentations. In addition to traditional items like spanakopita, the Manos brothers excel with seafood, so starters like branzino ceviche with Greek yogurt and Santorin-iinspired octopus may precede whole smoked and roasted red sea bream or scallops. Meat lovers can find a nice charcuterie board and a tomahawk rib-eye. 707 S. Grand Ave., downtown, 323.303.2535

A modern approach to Middle Eastern cuisine is currently trending across the country, and Jaffa, named after Tel Aviv’s oldest neighborhood, delivers that to L.A. diners. Veteran L.A. chef Anne Conness brings her finesse to Israeli/Mediterranean dishes without abandoning their Old World authenticity. Start with classic hummus with varied toppings and house-baked pita bread, or contemporary twists like sweet-potato or avocado-lime hummus. Entrées include fig-glazed salmon with saffron labneh, Moroccan-spiced roasted chicken and lamb couscous, which are washed down by Israeli wines or cocktails like the Dead Sea Mule. The energy of the restaurant’s namesake neighborhood is found in a bustling, light-filled space on 3rd Street, while the newer Palms location boasts an expansive patio. 8048 W. 3rd St., L.A., 323.433.4978; 10306 Venice Blvd., L.A., 424.298.8180

Despite L.A.’s massive Filipino community, the food of the Philippines has long been overlooked in favor of other Asian cuisines. Suddenly, however, Filipino cooking is all the rage, and at Silver Lake’s Ma’am Sir, chef/owner Charles Olalia (former executive chef at Patina) brings refined technique to his native Filipino traditions. The chef elevates lumpia (small spring rolls) by filling them with shrimp mousse and lardo sausage before topping them with uni. He also offers hearty pork-belly lechón, pancit noodles with crab, and oxtail kare kare, accompanied by cocktails infused with Filipino ingredients. 4330 W. Sunset Blvd., L.A., 323.741.8371 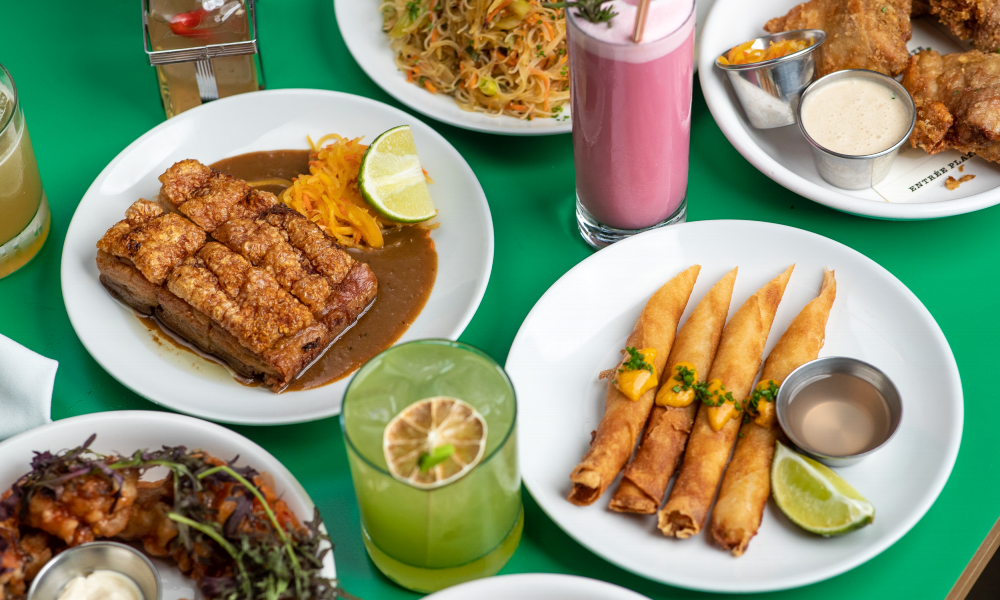 Helene An, the matriarch of Vietnamese cooking in L.A., has created a new fine-dining venue upstairs from her celebrity-favored Crustacean in Beverly Hills. The intimate Da Lat Rose offers an elaborate 12-course tasting menu ($225) that provides an extra degree of refinement and drama to Vietnamese cooking. A unique bread service at the start of the meal includes pâté, porchetta and pickled vegetables—all the makings of a classic banh mi sandwich. Every dish is personally significant to the renowned chef—the menu is dubbed her “gastrobiography”—and the parade of courses includes king crab bánh khot (a small mung bean pancake); a wagyu bò kho tamale; and An’s signature garlic noodles, topped here with uni, 24-karat gold and shaved truffles. Spring for the cocktail pairing, a procession of inventive, complementary drinks presented in delightful vessels. 466 N. Bedford Drive, Beverly Hills, 310.998.7919

Culver City’s Ms Chi Cafe is a personal project of Top Chef runner-up Shirley Chung and husband Jimmy Lee. She was born in Beijing but creates a novel cuisine in which traditional Chinese techniques are applied to familiar American concepts. The chef—who learned the business from the likes of Thomas Keller, Guy Savoy and José Andrés—offers engaging items like cheeseburger pot stickers with tomato-bacon jam, encapsulating the flavors of an all-American burger in a Chinese dumpling. Also available are a pastrami-filled scallion-pancake sandwich and hedgehogshaped bao filled with chocolate. 3829 Main St., Culver City, 424.361.5225

While Beverly Hills’ Urasawa still ranks as Greater L.A.’s most expensive sushi bar, Michelin two-star Sushi Ginza Onodera is not far behind. The omakase experience at the Tokyo import starts at $300, and the space’s minimalism translates not to austerity but exclusivity. The traditional edomae sushi (a Tokyo style in which the fish has been marinated and briefly aged) is made with fish from Tokyo’s Toyosu Fish Market and rice from Japan’s Niigata Prefecture. The procession of edible art presented at Sushi Ginza Onodera’s sanded hinoki bar is likely to include toro, uni chawanmushi (custard) with caviar, hairy crab, scallops and fresh uni from the waters of Hokkaido. 609 La Cienega Blvd., West Hollywood, 323.433.4817

Tijuana has an under-appreciated food scene, overshadowed by Oaxaca’s soulfulness, Mexico City’s refinement and the resort cities’ seafood. Like Tijuana, Tacos 1986 celebrates unpretentious street food, which precisely reflects the establishment’s own origins. Originally a cult-worthy Hollywood taco shack—you can still find it at Smorgasburg— Tacos 1986 has been transformed into a permanent restaurant in DTLA. The TJ-style tacos include simple carne asada, adobada (pork marinated in red chile sauce) and chicken, while quesadillas, mulitas (a taco-quesadilla hybrid) and vampiros (more like a tostada) are also popular. 609 S. Spring St., downtown 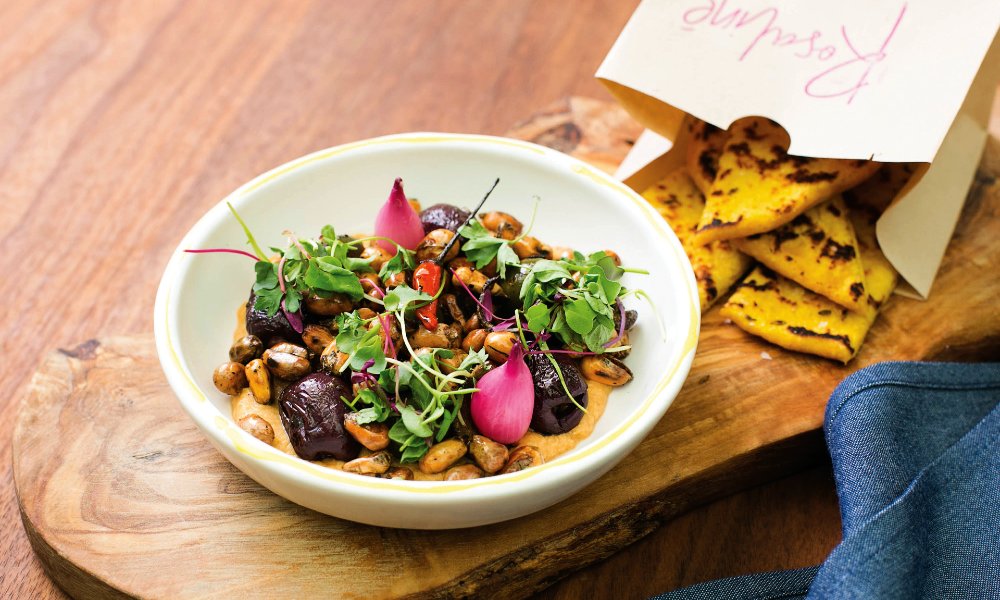 The indoor-outdoor design of West Hollywood restaurant Rosaliné features a galleria-like greenhouse with hanging exotic plants. Shareable small plates from high-flying Peruvian chef Ricardo Zarate include an entire menu from the restaurant’s ceviche bar and fried Amazonian paiche. Among larger plates are Zarate’s flavorful take on Peru’s signature dish of lomo saltado, whole branzino and arroz con mariscos with shrimp, scallops, clams and uni. Peruvian cuisine is influenced by a diverse array of cultures, from Portuguese to Japanese, and Zarate succeeds in translating it all into an exciting, contemporary experience. 8479 Melrose Ave., West Hollywood, 323.297.9500