64°F
You are at:Home»Blog»6 Legendary Dishes and Cocktails (Supposedly) Invented in Los Angeles 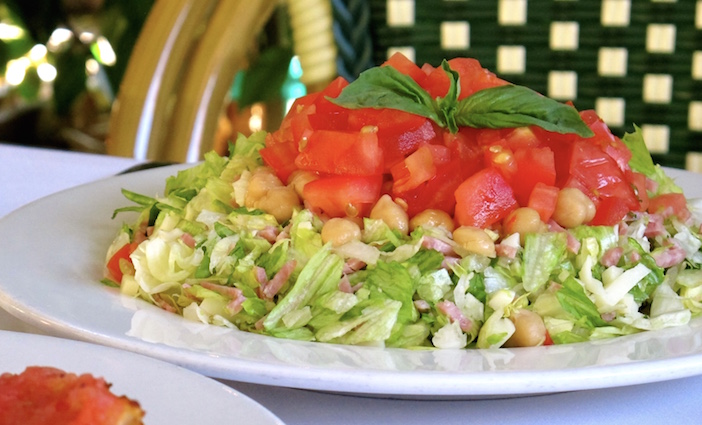 Legend has it The Chopped Salad originated in L.A.

Invented in Los Angeles … or not? From the French Dip Sandwich to the Flaming Margarita, discover 6 dishes and libations that purportedly were dreamed up in the City of Angels.

L.A. has long known that a salad is more than a few sad pieces of lettuce. Legend has it that the ubiquitous Cobb salad was invented at Hollywood’s Brown Derby. While the Derby is gone, another legacy salad lives on at Beverly Hills’ La Scala: the finely diced combo of lettuce, mozzarella cheese, salami and garbanzo beans known as the “Leon” chopped salad.

For more than a century, Cole’s and Philippe the Original in downtown L.A. have been fighting over the provenance of the French dip sandwich. Instead of taking sides, try both.

Looking to get the night lit? The Flaming Margarita at Echo Park’s El Compadre does the trick. Since 1975, the restaurant has kept the recipe for this signature cocktail under lock and key.

Now a staple on many menus, the Moscow Mule was invented at Hollywood’s now-shuttered Cock’n Bull.

The Moscow Mule purportedly was invented at Hollywood’s now-shuttered Cock’n Bull. Today, the version served at the Walt Disney-beloved Tam O’Shanter in Atwater Village is considered the most authentic.

The tropical delight known as the Zombie was invented at Don the Beachcomber; today, the best place to order one is Los Feliz’s Tiki-Ti, whose owner worked at Don’s.