66°F
You are at:Home»Blog»Dining In: L.A.’s New Hotel Restaurants are Destinations unto Themselves 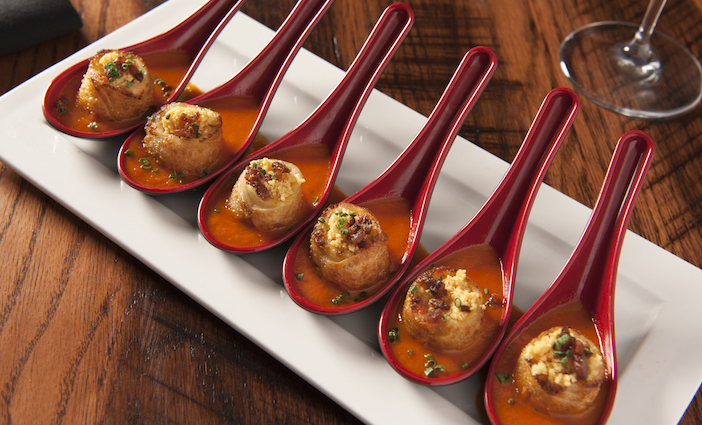 By Roger Grody, adapted from the September 2017 WHERE Los Angeles magazine

Los Angeles is experiencing a flurry of hotel construction, with historic buildings reimagined as boutique hostelries and luxury brands transforming the skyline with glitzy towers. Not long ago, a hotel restaurant was the last place an ambitious chef would aspire to work—but now, to the benefit of visitors as well as locals, that’s exactly where you’ll find some of L.A.’s top culinary talent.

L.A.’s culinary clout is on the rise, and underscoring that point is the arrival of Jean-Georges Vongerichten. The New York-based chef/restaurateur with a galaxy of Michelin stars and more than 35 restaurants worldwide recently debuted Jean-Georges Beverly Hills at the new Waldorf Astoria Beverly Hills, a sleek tower next to the Beverly Hilton.

One might begin with artistically presented toasted egg yolks with caviar, a Jean-Georges signature, or vibrantly colored Santa Barbara uni seasoned with jalapeño and yuzu, served on black-bread crostini. For entrées, a caramelized beef tenderloin is complemented by miso-mustard, while Parmesan-crusted chicken is sauced in a lemon beurre blanc. 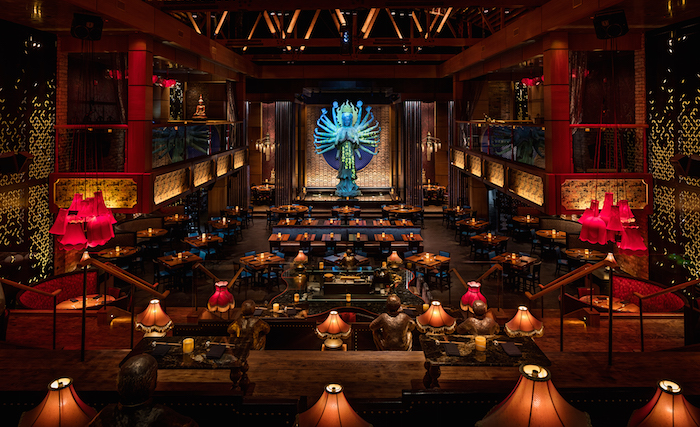 A stunning 20-foot statue of Quan Yin, the goddess of mercy, rises from a koi pond at Tao Los Angeles.

Another big splash in L.A.’s dining scene came courtesy of Tao—famous in Manhattan and Las Vegas for its dazzling decor, lychee martinis, lobster wontons and Peking duck. The local branch is part of a complex anchored by Hollywood’s new Dream Hotel, an emerging modern luxury chain with properties in New York, Florida’s South Beach and Bangkok. A stunning 20-foot statue of Quan Yin, the goddess of mercy, rises from a koi pond to dominate Tao Los Angeles’ soaring dining room. It is a dramatic, sexy dining spot, and the quality of the pan-Asian fare exceeds expectations for this kind of clubby scene. 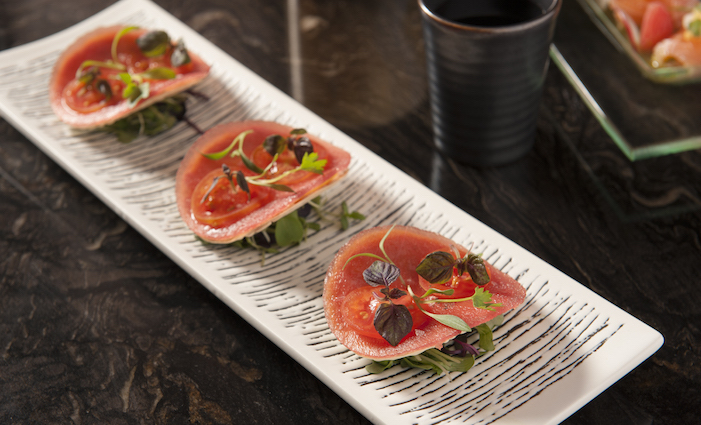 Another new lodging opportunity in Hollywood is the Kimpton-branded Everly Hotel, where all-day Jane Q offers great versatility. Duck-confit monkey bread and a croque monsieur may appear as breakfast items, while black-truffle calzone and roasted skirt steak with chimichurri are among the lunch and dinner offerings. Jane Q accommodates casual suppers before a show at the Pantages Theatre, and the hotel’s Ever Bar offers a large repertoire of creative mixology.

Recently opening at Wilshire Grand Center—thanks to a spire piercing the clouds, the building is now the tallest west of Chicago—is the InterContinental Los Angeles Downtown. The 889-room hotel supports multiple eating and drinking establishments, several of which use height to their advantage. On the 69th floor is an all-day buffet-style restaurant named Dekkadance, as well as sushi restaurant Sora, while Spire 73—the highest open-air bar in the Western Hemisphere—offers a creative lounge menu and spectacular views. 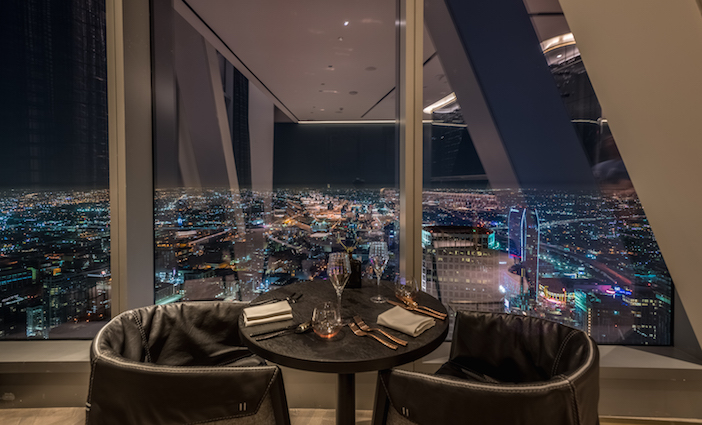 Enjoy a picturesque, French-influenced dinner at the InterContinental’s La Boucherie.

A French accent permeates the appetizer page at La Boucherie, with dishes such as salmon en croute, seared foie gras with apple-tarte tatin and onion-soup gratinée. Shareable starters also include ris de veau (sweetbreads) with chanterelles and even veal kidneys—increasingly hard to find in Paris, let alone L.A.—plated with grape mustard and morels. Dry-aged USDA Prime beef takes center stage for entrées, as well as game and fish. The experience at La Boucherie includes diners choosing their steak knives from an international collection and selecting from an even wider array of mustards and sea salts.

A $55 million makeover is concluding at the historic Hotel Figueroa, where an ornate Moroccan decor has been stripped in favor of an updated version of the original Spanish Mission Revival interior. With close proximity to L.A. Live, the Fig (slated for an October 2017 reopening) is sure to reassert itself as a significant downtown destination, driven in part by local celebrity chef Casey Lane. 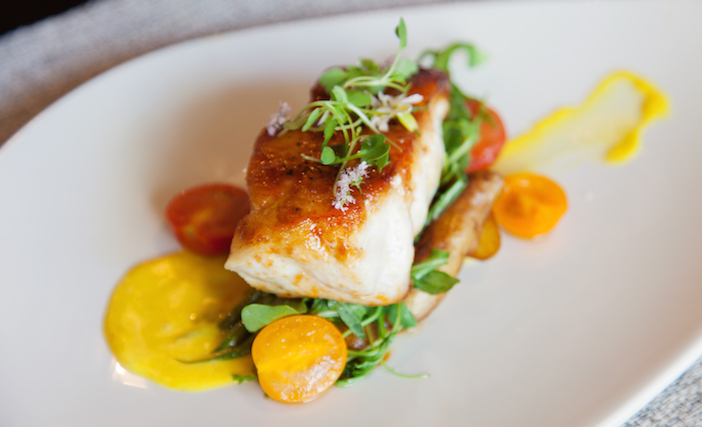 Treat yourself to Honey Miso Baked Seabass at Hotel Indigo in DTLA.

Less than a block away from the Fig is the new 18-story Hotel Indigo, part of the $1 billion Metropolis project rising above the 110 Freeway as it meanders through downtown. For dining, the Indigo offers Metropole Bar + Kitchen, a ground-floor restaurant whose design was inspired by the service tunnels crisscrossing beneath downtown L.A., which were used as secret passageways to illicit speakeasies during Prohibition. Executive chef Kevin Harry, a veteran of luxury hotels, offers starters like the W.T.F. (compressed watermelon, tomato and feta) and sexy foie-gras wontons with mango mustard before turning out a contemporary twist on steak frites, hoisin barbecue salmon and a vegetarian tagine from his eclectic menu. For a nightcap, an elevator ride to 18 Social, the Indigo’s top-floor cocktail lounge, is a no-brainer.

Downtown’s Fashion District, long a secret destination for savvy shoppers, has suddenly become, for lack of a better term, fashionable. New loft residences are creating demand for trendy cafés and shops, and ambitious redevelopment projects are reshaping the neighborhood. Capitalizing on the district’s newfound appeal is Tuck Hotel, a boutique property with 14 sleek, fashion-forward rooms. Delicat, the hotel’s restaurant, is a chic study in grays and browns, with modern art and a polished live-edge wooden bar.

For brunch, Delicat serves breakfast dishes and sandwiches that include 24-hour-smoked brisket with caramelized onions, and pancetta with potatoes and a fried egg—the last ingredient is a popular accoutrement to several other sandwiches on the menu. Delicat also offers an authentic tortilla de patata (Spanish omelet) served with silky aioli, and chef/hotelier Juan Pablo Torre shows off more of his Spanish heritage on a dinner menu that includes croquetas de azafrán (saffron croquettes) and crispy paella with artichokes and mushrooms. 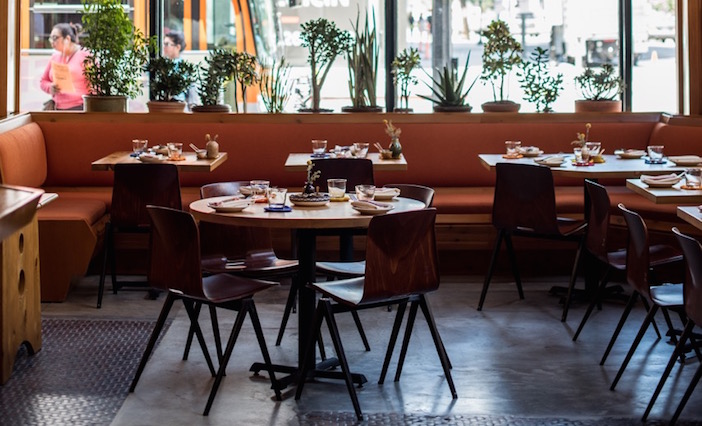 Dine on an Israeli-inspired menu, prepared by chef Alex Chang, at The Exchange at Freehand LA.

Also new to downtown is Sydell Group’s Freehand LA, part of a small chain that emphasizes local culture. Occupying the repurposed historic Commercial Exchange Building, the hotel offers a blend of traditional rooms and communal accommodations. For dining, the Freehand presents The Exchange, where, in true L.A. multicultural style, an Israeli-inspired menu is prepared by chef Alex Chang, who is Mexican-Chinese. The restaurant’s decor, from designers Roman and Williams, retains restored mosaic owls in the tile floor, from when an Owl Drug Store occupied the space. Desert plants line broad windows, while modern lighting fixtures illuminate a scene that seems to straddle two eras.

Creative cocktails (along with street-food-inspired snacks) star at laid-back Broken Shaker, on the Freehand’s lushly landscaped rooftop pool deck. The award-winning bar debuted at the Freehand Miami, but it is a particularly fitting—and compelling—example of L.A.’s revitalized hotel-dining scene.