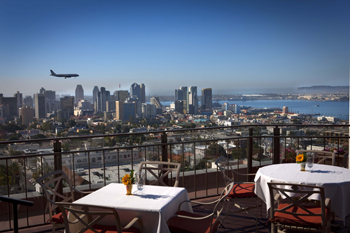 The sky’s the limit with our picks for fun, romantic ways to enjoy San Diego outside with that special someone.

SEASIDE PAMPERING
A couples’ massage always scores big on the romance scale, and the Catamaran Spa at the Catamaran Resort takes it even a step further. As the only beachfront spa in San Diego, the Catamaran offers complimentary amenities, including a Jacuzzi overlooking Mission Bay, comfy beach chairs, access to its indoor/outdoor fitness center and use of most hotel amenities. Book a couples’ massage in one of its tranquil suites before some Jacuzzi time under the sun on the co-ed terrace. 3999 Mission Blvd., Pacific Beach. 858.539.8820. catamaranresort.com/san-diego-spa

CINEMATIC PROPORTIONS
Catch a flick with your sweetheart under the stars at Full Moon Drive-In, a new drive-in moviegoing experience in Pacific Beach. The retro, 1950s-inspired drive-in features classic, digitally formatted films (think Dirty Dancing and American Psycho) played on a 52-foot screen, plus parking spaces for 150 cars, priority parking for classic ‘50s and ‘60s-era cars, and a front-row lounge seating area where pedestrians and cyclists are also welcome. Need a snack during the movie? Full Moon offers a free carhop service; just flip on your car’s interior light, and a carhop will appear to take your order from the concession stand, which serves up such fun treats as ice cream bars and old-fashioned malts. 1500 Felspar St., Pacific Beach. 888.211.0404.
fullmoondrivein.com

BIRDSEYE BRUNCH
With its 360-degree views from 12 stories up, elegant ambiance and stellar Mediterranean-fused American cuisine, Bertrand at Mister A’s is among the most romantic restaurants in San Diego. For the first time in its 48-year history, the landmark restaurant is offering a weekend brunch service Saturdays and Sundays from 10 a.m. to 2 p.m. Expect an array of brunch cocktails and savory entrees such as the pork-belly-and-sweet potato hash with poached egg. Reserve a table on its expansive rooftop patio and toast your sweetie with mimosas while watching incoming planes land at Lindbergh Field. It’s no wonder why marriage proposals are so popular at Mister A’s (hint, hint). 2550 Fifth Ave., Bankers Hill. 619.239.1377. bertrandatmisteras.com

PURE POETRY
Make date night truly poetic at the Old Globe’s annual Summer Shakespeare Festival, when its outdoor Lowell Davies Festival Theatre stage in Balboa Park comes alive with a series of the Bard’s most famous plays performed in repertory from June 2 through Sept. 29. The lineup includes spirited productions of The Merchant of Venice,  A Midsummer Night’s Dream and Rosencrans and Guildenstern are Dead. An evening of Shakespeare under the stars sounds downright dreamy to us. 1363 Old Globe Way, Balboa Park. 619.234.5623. theoldglobe.com

STARRY NIGHTS
Put stars in your date’s eyes at the Julian StarFest, held during the dark of moon Aug. 9-11 at the Menghini Winery in the charming rural town of Julian in northeast San Diego County. The annual four-day festival and “star party” explores the world of astronomy, complete with exhibits, guest speakers, wine tasting, live music and plenty of stargazing from the winery’s quaint vineyards and apple orchards. 1150 Julian Orchards Drive, Julian. julianstarfest.com

COASTAL CONCERTS
Catch an idyllic SoCal sunset, set to live music. The annual Summer Green Flash Concert Series at the Birch Aquarium at Scripps in La Jolla is back, with monthly concerts June 19, July 17, Aug. 21 and Sept. 18 on its outdoor Tide Pool Plaza from 5:30 to 9 p.m. Enjoy panoramic ocean views, light appetizers, craft beer and wine—all while such headliners as Vicci Martinez, Matt Costa, The Fixx and Steve Poltz perform. Keep an eye on the horizon for the real “green flash” at sundown. 2300 Expedition Way, La Jolla. 858.534.3474. kprifm.com/pages/green_flash