Breakfast is served at Sea & Smoke 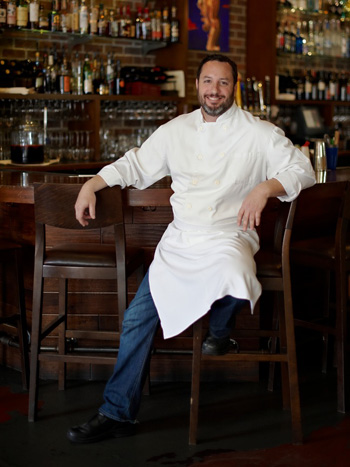 Breakfast may be the most important meal of the day, but finding higher-end restaurants in San Diego that serve it can be surprisingly difficult—especially during the week. Enter Matt Gordon, who has made sure that the most important meal of the day is also the most delicious—and available every single day. The chef and owner of Sea & Smoke located in Del Mar’s Flower Hill Promenade has debuted a brand-new brunch menu, now offered daily at the restaurant from 8:30 a.m. to 3:30 p.m.

While San Diego is home to many acclaimed restaurants that serve weekend brunch on Saturdays and Sundays, Gordon saw an opportunity at Flower Hill to tap into the constantly flowing traffic of shoppers and business professionals in the area during the work week. “We want people to know they can have a simple, quick breakfast here if they’re on the go, or they can have a leisurely meal with mimosas, even if it’s a Tuesday,” he says. “They can even have brunch for lunch.”

Gordon, who also owns Solace & the Moonlight Lounge in Encinitas, as well as North Park’s Urban Solace, which is known for its Bluegrass Brunch on Sundays, puts his signature spin on classic breakfast dishes at Sea & Smoke. The menu begins with a Classics section, highlighted by the Croque Ma-Daaaamn (yes, that’s how he spells it) made with house brioche, Swiss cheese, cured ham, Mornay sauce and locally sourced eggs. Another Classics doozy is the cinnamon roll sandwich: Ham, bacon, cheddar cheese and a fried egg are sandwiched between two cinnamon rolls, along with a side of maple syrup—making for a decadent combination of sweet, salty and savory.

Another section of the menu features a cast-iron-skillet benedict; corn bread is topped with steamed spinach, two poached local eggs, mustard hollandaise and your choice of hanger steak, mushrooms, pork belly, wild salmon or brown-sugar bacon. Go for the hearty pork belly benedict and ask for a side of creamy grits.

For breakfast straight-shooters and those looking for simpler options, the menu also features omelets, a frittata, an egg-white scramble, whole-wheat pancakes, French toast and house-made granola. Lunch-style items are also available, including a selection of salads, sandwiches (try the open-faced Cuban tartine with roasted pork loin, ham, Swiss cheese and grain mustard), small plates, and artisan cheeses and meats. Wash it all down with a steaming cup of pour-over coffee. Breakfast is indeed served. 2690 Via de la Valle, Del Mar. 858.925.8212. seaandsmoke.com