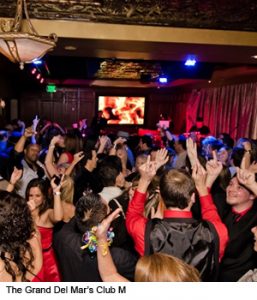 If you’re looking for a location for feasting and toasting the new year, or a party to pop that cork and hit the dance floor as the ball drops, we’ve rounded up all the holiday’s happenings to ring in 2015 with true San Diego flair.

Sheraton Carlsbad’s Family Friendly New Year’s Eve 70’s Disco Night
Time to boogie boogie into the Sheraton Carlsbad’s NYE disco party with a buffet, bubbles for the over-21 crowd and a game room with activities set up for the children. Tickets are $95 per adult and $35 per child. 5480 Grand Pacific Dr., Carlsbad. 760.827.2444 sheratoncarlsbad.com

Estancia’s Spa Special & Dining
Book any spa service on Christmas Day or New Year’s Day and receive a complimentary service of the same treatment on a future visit. Make a reservation at 858.964.6590. For NYE, enjoy a four-course prix fixe holiday menu at Adobe El Restaurante with live music by John Caine, or head over to Mustangs & Burros to ring in the new year with music by Andy Mauser. Call 844.471.3755 for all dining reservations. 9700 N. Torrey Pines Rd., La Jolla. estancialajolla.com

Ring in 2015 on a Hornblower Cruise
Cheers to 2015! Sail into the new year aboard one of Hornblower Cruise’s finest yachts. Take in the scenic San Diego Bay lit to perfection, and dance the night away on the New Year’s Eve Dinner Cruise, or enjoy a relaxing January 1st aboard the brunch cruise. Tickets start at $165. 1800 N. Harbor Dr. 619.686.8715. hornblower.com

New Year’s Eve Bivouac Celebration at The US Grant
The Bivouac Club returns for its third year with new surprises to ring in 2015 San Diego New Year’s Eve in ‘frozen’ fashion. Celebrate a captivating night snowed in at The US Grant’s Celestial Ballroom (a known speakeasy during the days of Prohibition) as it flashes back to its heyday, fused with the modern, urban energy of today’s most popular nightlife experiences. Advance purchase tickets required. $75+. 9 p.m.-2 a.m. The US Grant, 326 Broadway, Downtown. eventbrite.com

The Grand Del Mar
In the Elizabeth Ballroom the party will be held from 9 p.m. to 1:30 a.m. Dancing throughout the night, featuring Project M, Southern California’s high energy, variety dance band. Cover charge: $68/pp. In Club M, there will be entertainment including several guest video DJ sets by DJ Showtime and DJ E-Roc from 8:30 p.m. to 1:30 a.m. Party favors and Champagne toast are complimentary. Tickets are $65/pp. 5300 Grand Del Mar Ct., 858.314.2000. thegranddelmar.com