Celebrate America’s birthday with good ole BBQ, parades, music and a great view of one of San Diego’s many fireworks displays as the climax to the festivities. 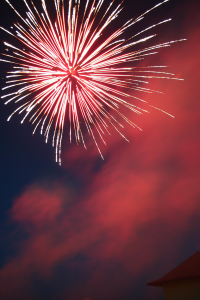 San Diego County Fair
With events all day long, the climactic fireworks display at the fair is only part of the fun. Attendees can participate in pie eating contests, patriotic floral contests, patriotic costume contests, and listen to guest speakers. At 6 p.m., head to the grandstands for the Frog X Parachute Jump Team and the 1,100 square-foot-flag. Enjoy a hometown heroes parade, performances by the Navy Band Southwest, a performance by Dana Carvey and the fireworks display at 9 p.m. The fair is open until midnight, leaving plenty of time for shopping, snacking, touring exhibits and more. 2260 Jimmy Durante Blvd., Del Mar, 858.755.1161. sdfair.com

Hornblower
Grab one of the most unique vantage points for the fireworks aboard a Hornblower dinner cruise. With boarding available at either 6 or 6:30 p.m., guests will enjoy champagne, an elaborate dinner buffet, DJ entertainment, panoramic views and a front seat to the Big Bay Boom fireworks show sponsored by the Port of San Diego. 1800 N. Harbor Dr., San Diego Marina, 619.686.8700. hornblower.com

Sea to Shining Sea
SeaWorld keeps the celebration going after most the firework displays have finished. Set to start around 10:10 p.m., the park will light up the sky with their “Celebrate the Wonder” presentation. The summer offers extended hours at the park with nighttime shows the entire family can enjoy. 500 SeaWorld Dr., Mission Bay, 800.257.4268. seaworldparks.com

OB Pier Fireworks Display
After a day of celebrating with family and friends, grab a picnic blanket and enjoy the fireworks display as they’re launched from the end of the Ocean Beach Pier. oceanbeachsandiego.com

Coronado Independence Day Celebration
Independence day starts at 7 a.m. for those participating in the Crown City Classic run at Tidelands Park. Spreckels Park hosts Art in the Park as well as concerts throughout the day by the Coronado Community Concert Band. The Independence Day Parade salutes bystanders with the theme of “America’s Spirit” and at 9 p.m., enjoy the fireworks display over Glorietta Bay. ecoronado.com