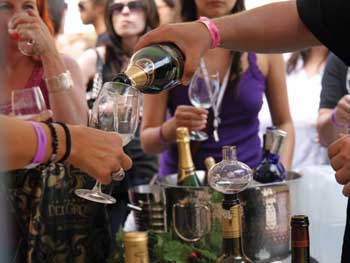 Gator by the Bay Zydeco, Blues & Crawfish Festival
May 8-11. Get a true taste of the bayou at the west coast’s premier blues and crawfish festival, now extended to four rockin’ days. More than 50 performers will rock multiple stages, including a performance Grammy Award winner Chubby Carrier. The festival boasts more than 8,000 pounds of crawfish, cooking demonstrations, dancing and Cajun fun for the whole family. Spanish Landing Park at Harbor Island. 619.234.8612. gatorbythebay.com

Ocean Beach Kite Festival
May 10. Learn to make a simple kite that is guaranteed to fly at this family festival now in its 66th year. In addition to traditional kite making for children, the event includes flying demonstrations and kite stunts by professionals and dedicated amateurs. There are also carnival rides and food booths to keep the family entertained all day. Free. 10 a.m.-4 p.m. Dusty Rhodes Park, Sunset Cliffs Boulevard, Ocean Beach. oceanbeachkiwanis.org

Water by the Spoonful
Through May 11. After serving in Iraq, Elliot Ortiz begins a new life. At the same time, four strangers in an online chat room seek support to face demons of their own, causing the real world and the virtual one to intersect. Winner of the 2012 Pulitzer Prize for drama. White Theatre at the Old Globe, 1363 Old Globe Way, Balboa Park. 619.234.5623. theoldglobe.org

Christina Perri
May 14. TheiTunes’ Breakthrough Pop Artist of 2011, Christina Perri stormed on the scene with her “Lovestrong” album, featuring the breakthrough single “Jar of Hearts.” She went on to land “A Thousand Years” as the coveted theme song for The Twilight Saga: Breaking Dawn. Perri is currently touring to support her latest album, “Head or Heart,” which dropped in March. Humphreys Concerts by the Bay, 2241 Shelter Island Drive, Shelter Island. 619.224.3577. humphreysconcerts.com

North Park Festival of the Arts
May 17.This 18th annual celebration of the arts will feature more than 40 artists showcasing their work, a kids art block and live music. The Waypoint Craft Beer Block will offer more than 30 craft beers. Between art viewings and beer tastings, enjoy live performances on six different stages. 10 a.m.-6 p.m. The festival is free, but tickets are required for the beer garden. University Ave. between 30th and 32nd streets, North Park. 619.294.2501. northparkfestivalofarts.com

Pet Day on the Bay
May 17. Hornblower’s popular, pup-friendly Pet Day on the Bay promises a tail-wagging good time. Take advantage of the one time each year that Hornblower invites dogs to cruise for free with their owners on a one-hour narrated tour of San Diego Bay. Pet Day doubles as a towel and blanket drive benefiting the homeless animals of the Helen Woodward Animal Center. Guests are encouraged to contribute a gently used blanket or towel. Cruises depart at 9:30 a.m., 11:15 a.m. and 1 p.m. 1800 N Harbor Dr., San Diego. 619.686.8715. hornblower.com

Sicilian Festival
May 18. Little Italy’s colorful celebration and 21st annual tribute to Sicily is dedicated to preserving Sicilian and Italian culture and heritage. The Sicilian Cultural Pavilion features a wide variety of artists and historians showcasing their Italian pride. Nosh on authentic Sicilian cuisine and enjoy real Italian and Sicilian entertainment, including everything from opera to contemporary music, on four stages. The festival also includes a children’s area, a Peroni beer and wine tent, a car show and a grape stomp. 10 a.m.-6 p.m. India Street, Little Italy. 619.469.2206. sicilianfesta.com

Steve-O
May 22-25. Famous for his borderline insane antics as part of Johnny Knoxville’s MTV series,Steve-O (a.k.a. Stephen Glover) has become a household name synonymous with hilarity. After deciding college wasn’t for him, he enrolled in Ringling Brothers and Barnum and Bailey Clown College to help further his goal of becoming a professional stuntman. With the launch of his “Steve-O Don’t Try This At Home Tour,” he established himself as an accomplished stage performer. American Comedy Co., 818 B Sixth Ave., San Diego. 619.795.3858. americancomedyco.com

The Book of Mormon
May 27-June 8. From the creators of South Park, experience the religious satire musical that everyone’s raving about. The Broadway hit is also the winner of nine Tony Awards, including Best Musical. Contains explicit language. Broadway/San Diego, Civic Theatre, 1100 Third Ave., downtown. 619.570.1100. sandiegotheatres.org

Rock ‘n’ Roll Marathon
June 1. Rock out during this 26.2-mile trek that features live music lining the streets, cheer squads and a huge post-marathon concert to end the race with a bang. The race route includes more than nine miles of San Diego’s scenic waterfront and a stretch through Petco Park. The post-race concert at the finish line festival is open to the public. runrocknroll.competitor.com