Events | San Diego Things To Do in February

Check Out the Best San Diego Things To Do in February 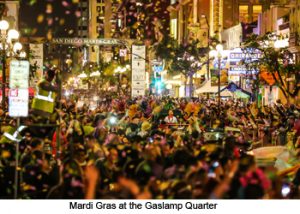 From museums, theater and sports, to Mardi Gras and Chinese New Year festivities, we’ve rounded up the San Diego events you won’t want to miss this February.

The Marvel Experience
Feb. 7-22. Join forces with Marvel’s mightiest heroes on a mission to save the planet. The Marvel Experience is a first-of-its-kind attraction covering over two acres and encompassing seven domes in a 360 decree, 3-D experience. Visitors can enjoy a close up look at the life-size Avengers’ Quinjet, browse exclusive Marvel collectibles and grab a bite at the hero-themed dining area. Del Mar Fairgrounds, 2260 Jimmy Durante Blvd., Del Mar, themarvelexperiencetour.com

The Chinese New Year Red Ball—Year of the Sheep
Feb. 27. Usher in the Chinese New Year at the annual Red Ball held at Club M inside the Grand Del Mar. The Year of the Sheep recurs once every twelve years in the Lunar calendar and symbolizes peace and compassion. Guests of the party will enjoy live music, DJ entertainment, dancing and more. Red cocktail attire is suggested for good luck. Admission is complimentary by RSVP only to party@clubvipsd.com. 5200 Club M at The Grand Del Mar Way, Del Mar, 858.314.1950. clubvipsd.com

Murder for Two
Through Mar. 1. The Old Globe’s engaging new comedy promises not to disappoint. Multi-millionaire Arthur Whitney has been murdered at his own birthday party, and his killer could be any one of the guests. No ordinary murder mystery, the entire world of this hilarious musical is brought to life by two incredible performers: one plays the detective and the other plays all 10 suspects, and both play the piano. Old Globe Theatre, 1363 Old Globe Way, Balboa Park. 619.234.5623. theoldglobe.org

Don Giovanni
Feb. 14, 17, 20, 22. Pompous, lustful and masochistic, Don Giovanni is the ultimate bad boy, but is he more? In this intense opera, Giovanni stalks his latest conquest, but he cannot escape his past sins. In a shocking conclusion, we find that the living are not the only ones who can seek vengeance. San Diego Opera at the San Diego Civic Theatre, 1100 Third Ave., downtown, 619.570.1100. sdopera.com