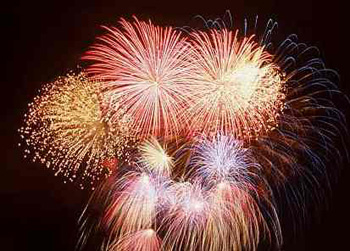 FIREWORKS
Big Bay Boom
July 4. Now in its 12th year, Big Bay Boom is one of the largest firework shows in the United States. Over 500,000 people are expected to enjoy this 18-minute extravaganza. The show will be choreographed to a musical selection that can be heard on THE WALRUS 105.7FM radio. Get together with your family and friends, and watch Big Bay Boom at one of five prime viewing locations. 9 p.m. Shelter Island, Harbor Island, Embarcadero, Seaport Village and Imperial Beach Pier. bigbayboom.com

4th of July Fireworks Celebration at the OB Pier
July 4. Head to the beach early to save your spot on the beach for this annual fireworks celebration. Launched off the end of the pier, this fireworks show is a favorite among San Diegans. 9 p.m. Ocean Beach. oceanbeachsandiego.com

Coronado Independence Day Celebration
July 4. The patriotic activities kick off early in Coronado with a 15k run/walk at dawn and a rough-water swim at North Beach followed by the famous two-hour parade along Orange Avenue. Stick around after the parade to catch concerts in Spreckels Park, art displays and the spectacular fireworks over Glorietta Bay. Parade begins at 10 a.m. Fireworks at 9 p.m. Coronado. 619.437.8788. ecoronado.com/4th

San Diego County Fair
July 4. Celebrate Independence Day at the all-American San Diego County Fair. The day begins with a patriotic opening ceremony at the O’Brien Gate and continues with all the carnival rides, interactive exhibits and food that make the San Diego County Fair famous. The fireworks can be seen from nearly every outdoor location of the fairgrounds. Fireworks begin at 9 p.m. Del Mar Fairgrounds, 2260 Jimmy Durante Blvd., Del Mar. 858.755.1161.sdfair.org

EVENTS
Hornblower Cruises
July 4. Get a front row seat to the fireworks from aboard a Hornblower vessel in the San Diego Bay. Dinner cruises include a complimentary boarding cocktail, gourmet buffet dinner, DJ entertainment and most importantly, incredible views of the Big Bay Boom fireworks show. Have other plans for the fireworks? Hornblower is also offering one- and two-hour harbor cruises throughout the day that include a narrated tour. San Diego Ticket Booth, 1066 N. Harbor, San Diego and San Diego Grape St. Pier 1800 N. Harbor, San Diego. 888.467.6256. hornblower.com

Neighborhood BBQ and Bicycle Bash
July 4. Wear your red, white and blue to South Park where Alchemy’s Executive Chef Ricardo Heredia will be serving up all-American inspired cuisine along side craft beer and specialty cocktails from Hamilton’s Tavern and Green Flash Brewing Co. Guests can take part in a bicycle decorating contest and parade, bobbing for apples, pin the tail on the donkey and sidewalk chalk all while rocking out to some all-American live music. Don’t have a bike? Anything with wheels and no motor is fair game for the contest and parade! 11 a.m.-6p.m. Alchemy, 1503 30th Street, South Park. 619.255.0616. alchemysandiego.com

Historic Fourth of July
July 4. Celebrate America’s birthday in the birthplace of California in true 1800s style. The historic park is hosting an old-fashioned Fourth of July celebration where guests can relive the excitement of an Independence Day back in the 1800s including a parade, crafts, games, demonstrations that represent the fun activities enjoyed by the early settlers of San Diego, and a hat making contest for children. The main stage will be filled with entertainment including historic dancing, vignettes and patriotic music. Don’t forget to take a ride in the horse drawn wagon around the plaza. Old Town San Diego State Historic Park, San Diego Avenue and Twiggs Street next to the Old Town Transit Center. parks.ca.gov/?page_id=663