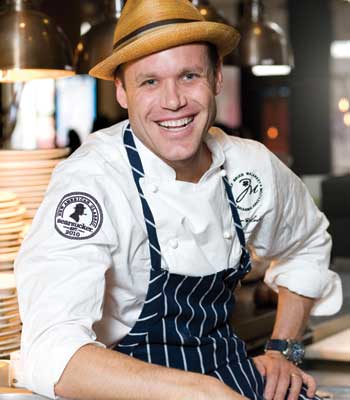 You might know Chef Brian Malarkey as the porkpie-hatted ham from a few seasons ago on Top Chef; to us, he’s the Tasmanian Devil of the San Diego dining scene, opening five restaurants in just over a year, each with its own unique concept and fabric-themed name.

With the help of his business partner, nightlife impresario James Brennan, Malarkey recently announced his ambition to go nationwide, expanding to 15 cities in the next five years. You may want to sample his big, bold flavors while you’re in town—he could whoosh into your city soon.

What’s with the fabric fascination?

It’s a fun game, pairing the fabric with what we’re trying to bring to the community.

We were trying to come up with the name for the first restaurant, and one day my wife and I were driving by Del Mar racetrack and I said, “I didn’t get to wear my seersucker suit for opening day,” and she looked at me and said, “What about Searsucker?” We looked it up and discovered it came from a hindu word meaning milk and sugar, so we thought the food connotation was pretty cool. Seersucker was originally worn by lower-class people because they didn’t have to iron it, they could just put it in their knapsack, but then it became fashionable. That’s what we wanted to do with food: food for the people that’s brought into fashionable society.

When we looked at the place in Del Mar, I wanted to do a playful American/Asian cuisine, so we went down the list of fabrics and Burlap fit the description. Think: coffee sacks with stamps from around the world.

At Gingham [a barbecue restaurant], we wanted to do a playful cowboy/checkered-table thing, but not cliché.

Gabardine is a fabric designed by Burberry in the late 1800s for fishermen, so that resonated down in Point Loma, thinking about its history as a Portuguese fishing community. And now it’s a fine fabric rather than a durable fabric.

Then Herringbone is sophisticated and chic, just like La Jolla. I went straight at that one, playing with the bone and the herring, the meat and the fish. The food is going to be fun, playful surf ‘n’ turf, cooking scallops in duck fat and that kind of thing.

Did Top Chef make you a better chef? How?

It made me more adaptable and gave me a lot more confidence. You get to meet all your idols: Mario Batali and Thomas Keller and all these great people that you put on a pedestal, and you realize that they’re just people. Then you think, “I can do what they do.” What separates a lot of good cooks from great chefs is knowing that you can do it and having the confidence.

Does San Diego deserve more recognition as a food city?

We’ve got Convoy Street with ethnic food, Latin flavors coming up from Mexico, and we have a lot of great chefs coming out to raise a family because it’s such a beautiful place. William Bradley, one of best chefs in the country, is up at Addison; we’ve got Jason Knibb (Nine-Ten), Carl Schroeder (Market). We’ve got world-class chefs here, but people just think of the sun and vacation.

What are some of your favorite San Diego neighborhoods?

I’m very partial to downtown; I love the vibe and the fun and all the people. I love hanging out in La Jolla; I’ve been swimming the cove lately, and I love the beautiful architecture, nice houses, beautiful trees.

And La Mesa [in East County] is a little diamond in the rough, absolutely adorable! It’s a world away: The people are so friendly; you open a restaurant and they’re hugging you, they’re thanking you, they’re lining up at the door. I grew up in a small town in Oregon and this reminds me a lot of that. It’s got the cutest little downtown with antique shops and restaurants, streets lined with lights, car shows in the summertime, a holiday parade … It’s just got that small-town vibe. What’s really fun is that the trolley stops two blocks from my restaurant [Gingham], so you can come from downtown, have dinner, hop back on the trolley and get home.

Where do you go to eat in San Diego (besides your own restaurants)?

My wife and I love brunch at Café Chloe, a cute French place down in the East Village. Cowboy Star is a funky, cool little steakhouse. My wife keeps going to Blue Ribbon Pizza and telling me how great it is. Little Bay Park Fish Company is a modest little fish store right in my neighborhood; it’s kid-friendly and it’s got great clams and mussels and local seafood.

Where do you take the kids when you get a day off?

The little ones are just old enough that they’re not eating sand anymore, so my wife loves to take them to the beach at La Jolla Shores. It’s one of the safest, most beautiful beaches in town. Don’t tell anyone.