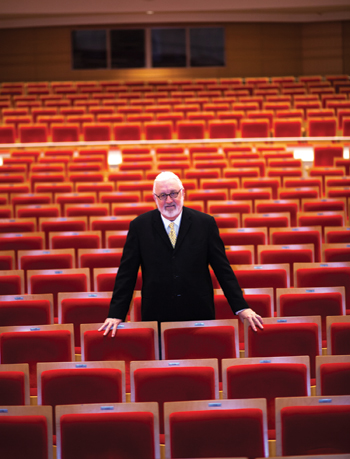 The Philharmonic Society of Orange County presents the world’s acclaimed orchestras, chamber ensembles and soloists in venues including Segerstrom Center for the Arts, Irvine Barclay Theatre and the Soka Performing Arts Center, where it recently offered a recital by cellist Yo-Yo Ma; the Vienna Philharmonic is next season’s centerpiece. Its youth programs bring music education to a quarter of a million children free of charge. Its president of 20 years, Dean Corey, graduated from Yale, began his career as a horn player with prestigious New York ensembles, then headed up orchestras around the country as an arts administrator. Corey, 66, lives in Laguna Hills with his wife, Kaly, and their black lab, Luc.

Where will you celebrate 20 seasons with the society?
I eat out a lot. I go to AnQi for garlic crab on Tuesdays. I’ve been to Bistango a thousand times. Marché Moderne—anything on the menu is great. But it would probably be at home. My wife is an extraordinary cook. The best meals are here.

What visions would you like to see fulfilled for the society?
It would be great to bring in an orchestra for a residency for a week, maybe every other year. The Cleveland Orchestra has been a great orchestra since the 1960s … and I think they would do it. They do a series of concerts regularly in Florida.

Opera would be the other thing. We’re doing a concert  version of a Handel opera next year. The Pacific Symphony is doing concert versions of opera. L.A. Opera comes here with concert versions three times this season. I’d like to see staged opera come back. Segerstrom Hall is ideal for opera but isn’t used for opera. It should be. I could see a joint venture between the Segerstrom Center for the Arts, ourselves, the Pacific Symphony and perhaps the Pacific Chorale.

You’re retiring next year.
We bought a house in southwest France, two hours south of Bordeaux, an hour north of Spain. It’s a hamlet, really, in the Haute-Pyrenees, the epicenter of foie gras. I retire at the end of the Philharmonic Society’s 60th season. I was also here for the 40th and 50th.

Before you go: Where would you take visitors to show them the real Orange County?
I’d show them a real sharp contrast. We’d go to Laguna Beach and to Mission San Juan Capistrano in the springtime, when the gardens are in bloom. Then, for something completely different, we’d drive up Silverado Canyon to Silverado—it’s like you’re in the Wild West. There’s a joint that serves breakfast, the Silverado Cafe. You’re light-years from Newport Beach—people can’t believe it’s the same area. The Modjeska House in Modjeska Canyon is also amazing but not always open for the tour— most people don’t get up there.

Where do you like to shop?
I’m not a big shopper. For men’s clothes, I go to Nordstrom.

There’s video online of you playing a piano in your office. Get that thing tuned!
It has not been tuned, and I’m  still working on that Schubert!  I haven’t touched my horn in years. I took piano in college,  and now I’m really enjoying it.

Any other passions?
Reading and writing. I’m writing Beethoven, the Late Great, 33 personal essays. The 33 is after Beethoven’s 33 Diabelli variations. I’ve written 20 of the 33.

You don’t have to analyze it. The normal listener, not versed in music, will feel that, understand that, get it. It’s innately human, like the difference between sweet and sour—it enhances, the contrasts balance each other. You can overdo either and ruin  it. It’s the same with drama  or visual art. The artists find the  balance to make it beautiful.