43°F
You are at:Home»Blog»Mummies of the World at Bowers Museum 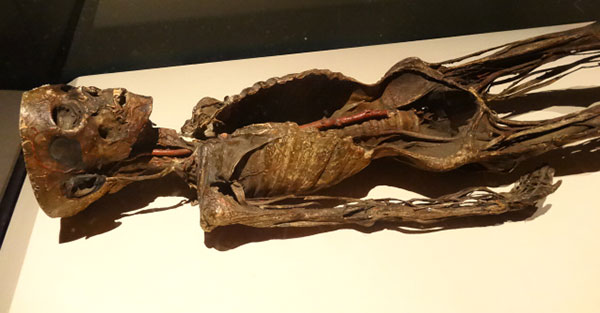 See mummies dating back as far as 4,500 years at Bowers Museum

From real mummies and ancient artifacts to cutting-edge 3D animation and interactive stations, take a journey through the past at the newest exhibit at Bowers Museum, Mummies of the World.

Take a peek into the lives of ancient people and cultures from every region of the world at the latest exhibit on view at Bowers Museum in Santa Ana, Mummies of the World. The new exhibit, running through September 5, portrays a once-in-a-lifetime collection of real mummies and artifacts from Europe, South America and Ancient Egypt. Portraying both natural and intentional mummification, this compelling collection includes ancient mummies dating back as far as 4,500 years. A fascinating mix of old and new, Mummies of the World bridges the gap between past and present.

The exhibition features a group of fascinating mummies and artifacts on loan from 12 world-renowned museums, organizations and collections coming from five countries. Some of the mummies showcased include The Vac Mummies (a mummified family from Hungary believed to have died from tuberculosis), The Baron Von Holz (a German nobleman found tucked away in the family crypt of a 14th century castle wearing his best leather boots), The Burns Collection (a group of medical mummies used to teach anatomy in the early 19th century), Egyptian animal mummies including a falcon, a fish, a dog and a baby crocodile, MUMAB (the first replication of Egyptian mummification done on a body in 2800 years) and much more. 2002 N. Main St, Santa Ana, 714.567.3600. bowers.org