73°F
You are at:Home»Blog»10 Plays in Orange County this Spring 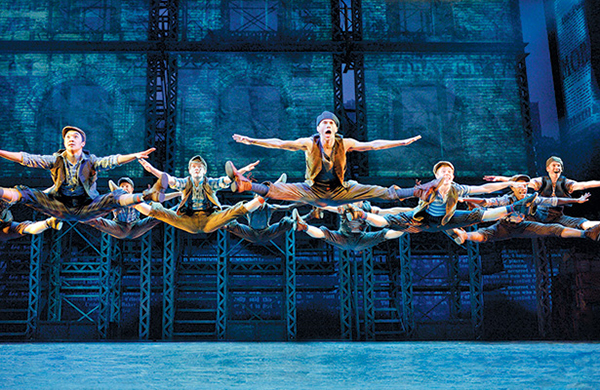 Newsies at Segerstrom Center for the Arts

Check out the 10 best plays in Orange County this Spring.

Louis and Keely: Live at the Sahara
March 1-27. Louis Prima and Keely Smith were an American musical sensation in the ’50s and ’60s, pioneering the lounge act in Las Vegas. Featuring many of the duo’s greatest hits including “That Ol’ Black Magic,” “Hey Boy Hey Girl,” “What is This Thing Called Love,” even Frank Sinatra appears in this new American musical play, featuring a hot seven-piece band that is guaranteed to bring down the house. Laguna Playhouse, 606 Laguna Canyon Road, Laguna Beach, 949.497.2787. lagunaplayhouse.org

Going to a Place Where You Already Are
March 6-27. A family ponders the existence of an afterlife when the grandmother claims to have gone to heaven and back. South Coast Repertory, 655 Town Center Drive, Costa Mesa, 714.708.5555. scr.org

The Book of Mormon
March 22-April 3. This irreverent musical has become a cultural phenomenon. This musical comedy follows the misadventures of a mismatched pair of missionaries, sent halfway across the world to spread the “good word.”  Contains explicit language. Segerstrom Center for the Arts, 600 Town Center Drive, Costa Mesa, 714.556.2787. scfta.org

Future Thinking
March 25-April 24. Chiara, a spoiled starlet, has a middle-aged, obsessed stalker fan, Peter. It’s Comic Con time, and Peter’s back—in spite of a restraining order—with visions of a dream world where he and Chiara will live happily forever. All Chiara wants is for her stage mom and her bodyguard to get lost—preferably, together. Everyone has a fantasy, and soon they’ll collide with each other—and reality. South Coast Repertory, 655 Town Center Drive, Costa Mesa, 714.708.5555. scr.org

Zombie in Love: The Musical
April 8-17. Based on the picture book Zombie in Love. Mortimer, a teen zombie, is looking for a girl to take to the Cupid’s Ball. Mildred, another teen zombie, also wants to find a date for the Ball. Mort takes out an advertisement: “tall, dead and handsome seeks…somebody… to meet me at the punchbowl at midnight”. Laguna Playhouse, 606 Laguna Canyon Road, Laguna Beach, 949.497.2787. lagunaplayhouse.org

Office Hour
April 10-May 1. A troubled student sits in the back of the classroom, wearing dark glasses, a baseball cap pulled down low…never speaking. His creative writing assignments are violent, twisted—and artless. He scares the other students and the teachers. He uses his writing to vent and provoke. Gina is the only teacher willing to get close—at her own risk. South Coast Repertory, 655 Town Center Drive, Costa Mesa, 714.708.5555. scr.org

Rodgers + Hammerstein’s Cinderella
April 19-May 1. Be transported back to your childhood as you rediscover the classic tale of Cinderella. The Tony Award-winning new take on the beloved tale features an incredible orchestra, jaw-dropping transformations and all the moments you love—the pumpkin, the glass slipper, the masked ball and more—plus some surprising new twists. Segerstrom Center for the Arts, 600 Town Center Drive, Costa Mesa, 714.556.2787. scfta.org

Sex and Education
April 27-May 22. A high school basketball star’s college scholarship is suddenly in jeopardy when his poorly-written, sexually-charged note to his girlfriend is intercepted during a final exam. Miss Edwards, his high school English teacher uses the note to teach Joe a lesson on life, love and the power of words. Explicit language. Laguna Playhouse, 606 Laguna Canyon Road, Laguna Beach, 949.497.2787. lagunaplayhouse.org

Amadeus
Opening May 6. Hear the glorious music of Wolfgang Amadeus Mozart in this psychological mystery. Transport back to Vienna, 1781: the city of drama, intrigue and scandal is abuzz with the arrival of a young Mozart, who can write an opera a week but can’t control his exuberant giggling and notorious libido. Antonio Salieri—until now the royal court’s most lauded musician—recognizes Mozart’s genius, calling him “God’s magic flute.” Pious, wicked, and soon to be guilt-ridden, Salieri tries everything to subvert the success of this enfant terrible. South Coast Repertory, 655 Town Center Drive, Costa Mesa, 714.708.5555. scr.org

Newsies
May 17-29. They delivered the papers, until they made the headlines. See an inspiring New York success story filled with one heart-pounding number after another. Segerstrom Center for the Arts, 600 Town Center Drive, Costa Mesa, 714.556.2787. scfta.org